July 30, 2013
Soon, it may be that we have those US Marines flying Osprey helicopters not only on Okinawa but also from Yokota, right next to Tokyo. Or so we are told. Of course they are just "studying" this at the moment.

I wonder where they would fly. East and over the capital of Japan? Or north, over 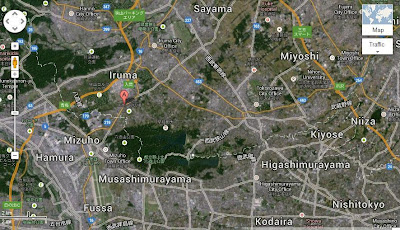 Saitama? And then? What would they be doing here, if not to cause a lot of anguish and trouble.

Or, perhaps, just straight up, and then down again...

Elevator flights bringing young recruits up and down again and again over that old US base, LOL.

The US Air Force is studying the deployment of the Osprey transport aircraft at Yokota Air Base in Tokyo, in addition to a US base in Okinawa.
Commander of the US Pacific Air Forces, General Herbert Carlisle, revealed this in Washington on Monday.
The US Air Force is considering the CV-22 Osprey as a successor to its special operations helicopter now based at the Kadena Air Base in Okinawa.
Carlisle said Yokota was a leading candidate for Osprey deployment in Japan, in addition to Kadena.
If deployed, the tilt-rotor Ospreys will likely be used to transport the US Army's special operation troops.
The US Marine Corps already have 12 Ospreys deployed at the Futenma Air Station in Okinawa, with another 12 to be added in August.
The deployment has drawn local objections, due to concerns over the aircraft's safety record.
An Air Force Osprey crashed during training at a base in Florida in June last year.
Considerations of local sentiment in Okinawa are apparently behind the Air Force's studies of Yokota as a possible deployment site.
Jul. 30, 2013

There is not much secret I suppose about Yokota Air Base, they have a proper website.

That website however, has no comment about the news that maybe they will be hosting Ospreys near Tokyo. Where would one get such news?

Can you, good people living in Tokyo, even locate Yokota on a map? I don't think so. If you ever venture out west, it is in Fussa, in Tachikawa. Just 30 minutes or so west of Shinjuku, Shibuya... Never heard of places like Yokota, Fussa, Tachikawa? Well, time to learn about the history of Tokyo, Japan.

Meanwhile Okinawa is talking with Hawaii about the transfer of US Marines to US soil.

Not sure US citizens want them in Hawaii or anywhere else. Is that why they stay in Okinawa?

Okinawa's government has sent senior officials to Hawaii to discuss a transfer of US Marines from the Japanese southwestern prefecture.
The official in charge of the US base issue, Susumu Matayoshi, and 2 others left for Hawaii on Tuesday.
They plan to meet Hawaiian Governor Neil Abercrombie, who proposed in March that most US Marines in Okinawa and their families should be transferred to Hawaii. The officials also plan to inspect US military bases in Hawaii.
Japan and the United States agree that the US military will move about 9,000 marines out of Okinawa. 2,700 are to go to Hawaii over 2 years from 2025.
Before leaving, Matayoshi told reporters that he will study how the governor's remarks relate to the Japan-US agreement. He also said he will see if the governor's plan would ease the burden of Okinawa's people.
The prefecture hosts about 74 percent of US military facilities in Japan.
Jul. 30, 2013
Kanagawa Peace Saitama Tokyo US military bases US-Japan Mutual Security Treaty (AMPO)

IMHO it is a mistake to make the aircraft the issue as it shifts focus away from the discussion of the US military presence in Japan.
11:06 am, July 31, 2013

Pandabonium said…
Already, due to the high operating cost of the V-22 Osprey, the Marine Corps is planning to replace it with an updated version of the CH-53 helicopter, designated the CH-53K. If we make the V-22 the focus, where will we be with regard to US bases in Japan, when they replace it with a "regular" helicopter? Answer: right back to square one.

TenThousandThings said…
Thanks for the head's up Martin.

P, the V-22 issue is not just about the aircraft, but is also about the expansion of US military in both Okinawa & Japan.

The plan is to use all of Okinawa and most of the mainland as a low-level testing & training ground for this boondoggle aircraft, especially through ecologically sensitive forested mountains. They are already low-level testing them in Yanbaru, the subtropical rainforest in northern Okinawa. Helipad construction and hot exhaust has destroyed sensitive habitat. Noise, especially night low-level training, and hazards have alarmed Okinawan residents.

Okinawan democracy and peace activists have tried to reduce the US military presence since the end of World War II. Right now, the focus is mitigation: to stop further expansion which is happening now in the form of V-22 low-level testing, training.

There are contesting views, even within Okinawa, regarding the US military presence. But Okinawans are unanimous about not wanting their entire prefecture turned into a testing site for an accident-prone aircraft hovering at low-altitudes over people in urban areas and through environmentally sensitive areas. Tokyo & Washington should honor their democratically expressed lack of consent for this program.
2:56 pm, July 31, 2013

Pandabonium said…
Thanks for discussing that additional dimension to the issue, TTT.
10:46 pm, July 31, 2013