Temple Stay: Lower Stress In Your Mind, Reduce Antibiotics In Your Body

July 21, 2013
Dr. Greger has a great website, Nutrition Facts, with numerous videos and information about diet and health. He promotes a plant-based diet, full stop. Not a semi-vegetarian, not a Meat-Free Mondays, no fooling around diet. But, as he points out, most diseases are caused by bad diet.

His advice is strictly based on recent scientific studies. Here is why I like him - there is no way I can keep up with all that is published in peer reviewed specialized journals. He does. Subscribe, and I promise it will be eye-opening and life-changing.

Here is a video that caught my eye - Dr. Greger talks about a group of South Korean researchers who looked at what happens to people who join one of the popular Temple Stay programs. This was a way for many people to enjoy the World Cup in Japan/South Korea back in 2002. Since South Korea didn't have so many hotels near their different new arenas, Buddhist temples in rural areas were invited, and encouraged, to let football fans from around the world enjoy a couple of days at a local temple. The campaign continued after 2002 and is still popular.

Now, what these researchers found, was that after just a week or so at a temple, eating a strict Buddhist diet (no meat, no fish, no eggs) participants significantly reduced the levels of antibiotics and phthalates in their bodies. Just by not eating meat contaminated with these substances, what they already had in their bodies, was able to escape. Note that none of the people participating in the study were actually on antibiotics, the drugs were found flowing through their bodies, as Dr. Greger puts it.

The present study demonstrated clearly that even short-term dietary changes could reduce the frequency of detection and levels of major antibiotics. Simply put, stop eating meat from animals that have been raised with these drugs.

Follow-up studies also found that the antibiotics and phthalates most likely came from diet. And I liked that they were able to show that the Temple Stay helped reduce stress, measured as "oxidative stress levels." 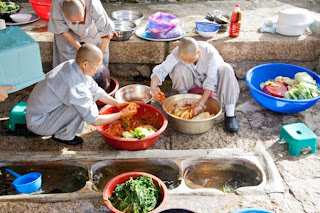 More about the Korean Temple Stay experience on the A Couple Travelers blog, from where I borrowed the great image of Korean monks preparing kimchi. They note:

As for temple dining the monks always eat vegan. With dinner, breakfast and lunch we got a pretty good feel for the dining options and can say there isn’t much variety. Rice and a simple soup is present at every meal, along with an assortment of pickled or fermented Korean kimchi veggies. Sometimes beans or what resembles marinated prunes is also available. Though the food was pretty good and we even got to see the female monks preparing the kimchi by hand the next day, the lack of variety must be difficult...


For many people around the world, especially in the so-called "first world" it seems incredibly hard to even consider changing their unhealthy meat-based diet, until it is too late, and something like cancer or heart disease happen. Temples in East Asia as well as in India of course, are all vegetarian. Here in Japan, they inspired a range of soy beans-based protein sources like tofu and using fermentation in the form of miso, soy sauce/tamari and natto, while in Korea, the fermented foods are mostly based on white cabbage and red peppers, in the form of kimchi.

A daily bowl of miso soup in particular seems to be great for health, especially if you add some seaweed.

Pandabonium (hat tip!) has a nice post about staying at a temple shukubo at Koya-san in Japan:

Of the 117 temples in Koyasan, 53 offer lodgings to visitors. These are called "shukubo" and may include two meals a day and morning sutra chanting. Food is strictly vegetarian. This way of cooking is called Shōjin Ryori, and was brought to Japan with Buddhism. Much more than just vegetarian cooking, it literally means to cook in a way that leads one to enlightenment.