Taro Yamamoto And Some Thoughts On The Election Results

Great to see Taro Yamamoto get enough votes as an independent candidate in Sunday's election. He has worked hard for it since 2011 to get into Parliament, when he had to split with his record company due to his anti-nuclear comments on the Internet. Good for him.

He paints a picture of someone like himself punching small holes in the huge concrete dam that is the current political situation, very inflexible and difficult to change. But even tiny holes can create a powerful leverage to crush that state of mind...

Not so great that the two green party candidates - while getting a lot of votes - did not make it. Also, not so great that Finland-born Marutei Tsurunen, a supporter of organic farming and generally a great guy, who spoke out against racism and took a great interest in the disaster prevention measures after the earthquake and tsunami, did not get re-elected. I wish him well, I have met him and Japan's parliament could need a lot more people of his ilk. Kiitos!

Blogger Temple Valley Times noted something I had missed - major newspaper Asahi's front page image of a great gathering of people is in fact from Yohei Miyake's rally at Shibuya Station in central Tokyo. Never heard of him? Seems there may have been something of a media blackout against this green party candidate. Says Temple Valley Times:

In the aftermath of Japan's recent national elections, some disappointed supporters of musician and Green Party candidate, Yohei Miyake, have blamed the loss of the progressive campaigner on what they believe was a virtual media blackout. This week Twitter was aflutter with folks decrying the lack of media coverage on Miyake and as evidence more than one sharp-eyed observer has pointed to this photo accompanying an election story in one of Japan's three largest dailies, the Asahi Shimbun.
The front page of the paper features a photo of  Miyake giving an electioneering campaign performance to a huge crowd in front of the entrance to Tokyo's Shibuya Train Station. While the article mentions every other political party, it spares no ink on the Green Party nor its main candidate who is pictured on stage in the photo.
Despite any obstacles he may have faced in getting his message across, Miyake didn't do too bad a job for a minor party candidate in an electoral system that is geared toward the big party machines. In fact he actually garnered more votes than a couple of his winning opponents and if that sounds a little fuzzy, take a closer look at that photo again. 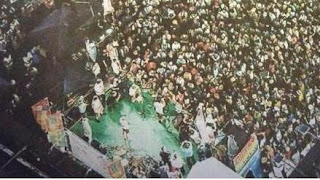 On closer inspection it would seem that the paper has digitally erased the words on the Green Party banner in the lower left hand corner. I don't know if I'd call it a news "blackout" but it does seem to have been a bit of a blur.

But we have Youtube and other means to find out about these people and candidates, and while I can't vote, you may know someone who can. Yes, it may be a couple of years down the line.

And here is a much better take on things, as they stand, from Ten Thousand Things:

"I/we lost, but I/we gained so much". He also mentions the need for international collaboration for world peace. He got a lot of votes. He is a winner for me. This is just the start of his new journey.
三宅洋平 / Yohei Miyake @MIYAKE_YOHEI


Ah, democracy. But, we prefer that to any other system of government. Right...?

(Thanks to the people who put English subtitles on these videos)

Johntaro said…
Nice post - I especially liked the quote from Temple Valley :). Thanks for the shout out and for adding your thoughts on the election.
10:09 am, July 25, 2013

I like the metaphor of small holes in a huge concrete dam. Once there's enough holes, somebody needs to come in <<<>>with sticks of dynamite<<>>.

It occurred to me that Japan is a consensus-builder to the point of being morally empty (case in point, status quo trumps prudence), and what we need to look for is leaders who have set an example of being surrounded by the rich and powerful, and turning against them!

Anonymous said…
Disclaimer: "come in with sticks of dynamite" is in reference to a metaphor! **** 比喩 ****

Tom O said…
Well, it could be said (me, cynical??) that democracy is giving too many people too much credit to decide what is 'good'. We have a term here in the UK, 'Middle England'- http://en.wikipedia.org/wiki/Middle_England

Should democracy be 'trusted' to these people? And/or readers of the Daily Mail?

'Democracy' here was responsible for ten years of Thatcher and another ten of Bliar (may have spelt the second name wrong there ;o) )

While mentioning the despised Thatcher can I mention a fave political joke of mine. Thatcher meets her great friend Pinochet at Heathrow airport. Front page photo of this accompanied by headline 'Facist right-wing dictator greets Pinochet at Heathrow'. Still makes me chuckle.
9:09 pm, July 25, 2013

Martin J Frid said…
Johntaro, thanks, I should have made this the Kurashi Times and maybe you would have added me to your blog list ;)

Ken, the CUJ office where I have a desk is next to Waseda University and it is nothing like you think it is - at least these days it is full of Korean and Chinese and Taiwanese and (I suppose) Europeans and maybe some Americans too. It is not one of the elite schools, if that is what you imply. As for Yamamoto Taro, let's see how he uses his new platform, he seems keen.

>it is nothing like you think it is - at least these days it is full of Korean and Chinese and Taiwanese and (I suppose) Europeans and maybe some Americans too. It is not one of the elite schools, if that is what you imply.

It's beyond elite, IMHO.

Waseda is heavily involved in Japan's Globalization Project, I think they have the highest international student population among all universities in Japan.

And somewhat coincidentally *wink wink* Waseda ranks #2 -in Japan- in MBA's every year, which, in the world of business equates to a perpetuation of capitalism institutional values. So, Waseda, in this sense, is one of the worst rich and powerful global business halfway houses around.

I think Miyake was well tuned in to this, and turned off by this as well. Why in the heck was he there in the first place, is what I want to know? The guy is artistic and grows his beard long! Perchance he was there precisely to infiltrate the system; to understand its inner workings.

While I was going through University in the late 90's and early 2000's (I stopped going), somewhere along the way I figured out what the University originally was and had become, why I was there, and what it all meant.

Anyway, not to go in too deep, I'll just say that I think a BIG part of the fights we face today are directly related to the institutional values that Universities embrace, that is - values of capitalism that ultimately wreck havoc with the Earth and its peoples.

Anyway, the Universities for Profit that are big on market share and pumping out MBA's are, imho, a higher order of evil.

Somebody needs to come along and turn the present University System model inside out, and use it for a bunch of awesome stuff we can do.

Martin J Frid said…
Ken, thanks. Satoyama Rangers, I like that a lot. Let's see how that can be developed without it taken over by the powers-to-be.