Oliver Stone To Visit Hiroshima, Nagasaki and Okinawa In August

In an event that celebrates the 120th anniversary of the establishment of the Ryukyu Shimpo, the newspaper will invite two-time Academy Award-winning director Oliver Stone and Peter Kuznick, professor of History at American University to Okinawa. 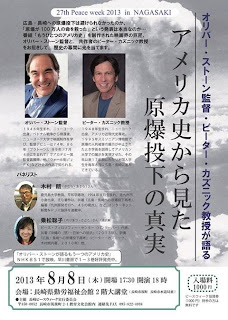 The event will feature a lecture by Stone with a panel discussion. Stone will also get to observe the U.S. military bases in Okinawa for the first time. With Satoko Norimatsu from the Peace Philosophy Centre as interpreter, the discussion will cover the excessive burden on Okinawa of hosting bases and U.S. military strategy. Some of the works of Stone and some digest footage of his visit to the prefecture will also be shown.

Venue: Theater building of the Okinawa Convention Center in Ginowan

On August 6 Oliver Stone and Peter Kuznick will take part in a symposium in Hiroshima, and on August 8 they will visit Nagasaki. Their documentary The Untold History of the United States is currently being shown on NHK BS1.