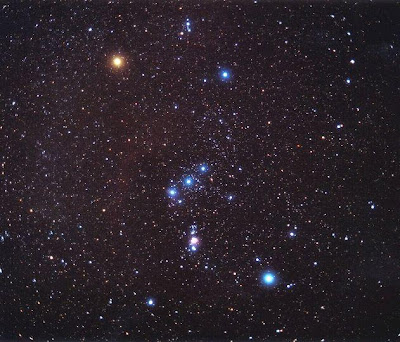 Very clear sky tonight, with some thunder and lightning back over in the Chichibu mountains. Wish we would get some rains. It is rather hot this summer, is it not?

Which means, taking a walk at night is such a pleasure. Thanks to P, I was made aware of the fact that you can easily spot Jupiter, that huge planet, as it emerges in the night sky near the full moon. He even suggested that it is possible to see a moon or two, using binoculars.

I was reminded of how much effort people in the past put into carefully noting such events.

Tycho Brahe, a Dane living on the tiny island called Hven or Ven between Denmark and Sweden, near Malmö and east of Copenhagen, made many of the observations that were later used by greater minds to help us all make sense of the universe.

Uranienborg, "The Castle of Urania" was his star observatory, and he also tried to impose farming methods, inspired by his travels, such as his journey to the botanical garden in Padua that Tycho probably visited in his journey to Italy in 1575...

At the age of 13, Tycho was sent to the University of Copenhagen to study philosophy and rhetorics. A solar eclipse 1560 awoke his interest in astronomy, and he began reading books on the subject. He attended the universities of Leipzig, Wittenberg, Rostock and Basel to study law, humanities and science. In Leipzig he started astronomical studies without permission, but was soon forgiven after demonstrating successes. He found that old observations were very inaccurate, and started to design methods and instruments for high-precision measurement of positions of celestial bodies.

I think we need more such people, right now.

Image of Jupiter and Uranus from Jodrel Bank Centre for Astrophysics:

This month, Uranus lies a few degrees to the right of Jupiter. On the first of August, Uranus, at 5.8 magnitude, is close to a 6.3 magnitude star which lies between it and Jupiter some 3 degrees to its lower left. As the month progresses, Jupiter closes on Uranus and at month'e end is just 1 degree 45 arc minutes to its lower left, just below the 7th magnitude star and so forming a right angle triangle. Given a small telescope you may resolve the 3.6 arc second greenish-blue disk. With Jupiter on the left, both will be seen together in a binocular field of view and Uranus will be the brightest object in the field after Jupiter.

Urania, the Greek godess of astronomy, was (according to wikipedia) the "mother of the musician Linus. She is usually depicted as having a globe in her left hand. She is able to foretell the future by the arrangement of the stars. She is often associated with Universal Love and the Holy Spirit. She is dressed in a cloak embroidered with stars and keeps her eyes and attention focused on the Heavens. Those who are most concerned with philosophy and the heavens are dearest to her."

Urania, o'er her star-bespangled lyre,
With touch of majesty diffused her soul;
A thousand tones, that in the breast inspire,
Exalted feelings, o er the wires'gan roll—
How at the call of Jove the mist unfurled,
And o'er the swelling vault—the glowing sky,
The new-born stars hung out their lamps on high,
And rolled their mighty orbs to music's sweetest sound.

—From An Ode To Music by James G. Percival

Jantar Mantar in Jaipur, India, is another place where stars and planets and the universe were carefully obserrved.

Architecture Science has a pdf file, by Berry Perlus, Architecture in the Service of Science

Meanwhile, still on Planet Earth, back here in Japan, you can always be certain that there is much more to explore.

The three stars of Orion have been an inspiration here, for a long time. Mitsu Boshi are sometimes called San Jou Sama, and fishermen sometimes mention Sumiyoshi.

How about Yowatashi Boshi; Stars that Pass in the Night Japan's Cultural Heritage Reflected in the Star Lore of Orion by Steve Renshaw and Saori Ihara October, 1999. A further revised version appears in The Kyoto Journal, Issue 48, July, 2000. 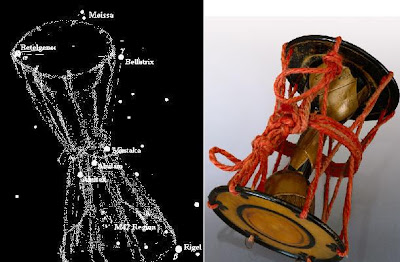 Agricultural associations discussed so far have generally been related to the setting of Orion during early stages of annual rice cultivation. The rising of the three belt stars in the East was also an agricultural symbol and was allied with the end of the period of rice cultivation. Hara (1975) records that in many rice farming areas, the stars were called Haza no Ma, a term that refers to a three pole stand that is used in the field to dry rice. In the early phases of autumn, when Orion is no longer seen at sunset but rather rising earlier and earlier each night, farmers looked to the belt stars and saw them as a symbol that "only Hasa are left in the field", the harvest of rice being over.

While incorporation of a lunar calendar and later complete adoption of a Gregorian calendar in post Meiji era Japan led to more precise methods for determining times for planting and harvesting, many old farmers in rural agrarian areas still use methods that are centuries if not millennia old. According to Uchida (1973), the following time piece is still recited in such areas: "When Mitsu Boshi are one fathom high; it's time to go to bed. when Mitsu Boshi are in the middle, it's the middle of winter; and when Mitsu Boshi lay, it's time to wake up." This of course, refers to the vertical alignment of the three belt stars as they rise in early Fall, the angular position in the middle of the Southern sky in Winter, and the horizontal visual alignment in the West in Spring. The metaphors are related to (respectively): Fall harvest, Winter rest, and Spring planting.

Star lore related to fishing is somewhat more rare than that which is related to crop cultivation. It was primarily through cooperation of local farmers along with their local ancestral kami or gods in the production of rice that early Japanese rulers were able to fulfill their purpose of unifying the country under singular rule. Still, incorporating the legends of families of fishermen was an important part of this unification, and a mix of agrarian and fishing lore is sometimes found (See Nojiri, 1988).

In some fishing areas, the three belt stars are called Kanatsuki which is a name given to a spear with three prongs used in fishing (Nojiri, 1973; Uchida, 1973). We can note some similarity in pronunciation of Karasuki (plow) and Kanatsuki. As a sign, Kanatsuki was used as a time piece for favorable catches. When prospects for such seemed to be particularly good in the Fall, old fishermen were often heard to say "Let's wait for Kanatsuki" before going out for the evening's catch. 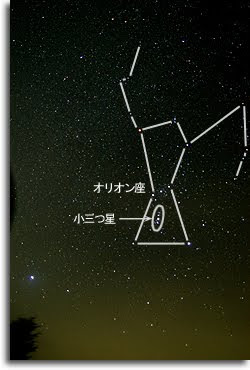 Pentax, the camera company, has a lot of details if you are interested in photography of the stars...
Malmö Music progress Sweden Universe

Pandabonium said…
It is sad that with electrification, people in cities lost touch with the heavens at night. It is just as bad as losing touch with the forests, and animals, other natural realms, and even the growing of their food - leaving modern people cut off from the universe they are a part of. No wonder so many are confused and chasing after artificial happiness and finding emptiness instead.

A night outside in the open where there are few lights - perhaps laying on a blanket on grass or on a lounge chair - can provide a deeply moving experience as one reconnects with the cosmos and sees what an awesome place it is.

I would suggest a community holiday, to be scheduled at short notice, when the weather is forecast to be good. On that date, everyone in the community would agree to keep bright lights and all outdoor lights off for a period of a few hours, and everyone could come outside, talk to one another, and look UP!

Pandabonium said…
and please allow me to add the name Johannes Kepler, a man who worked for Tycho Brae at one point, and whose mathematical treatise Nova stereometria doliorum vinariorum, on measuring the volume of containers such as wine barrels, led to infinitesimal calculus and an accurate understanding of the orbits of the planets around the sun.
11:42 pm, August 25, 2010

Martin J Frid said…
Community evening holiday - lights out, elders together with the kids, teaching and learning the names of different star constellations, planets, in awe.