Japan established diplomatic relationships with Afghanistan in 1931, but recently, the relationship is obviously much more complex.

SPJ's Ozawa is on the record as wanting Japan to join ISAF, the International Security Assistance Force in Afghanistan.

Back then, in 2007, the former LDP-led government which included Komeito - the party that we all know is strongly affiliated with Sokai Gakkai - did not agree. 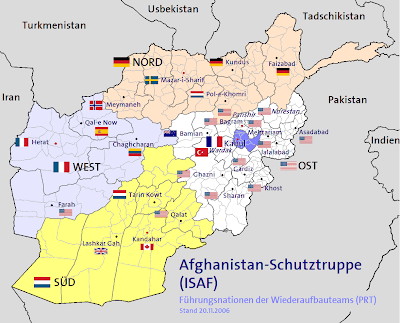 As you can see on the map, Sweden (not part of NATO) - is a member of ISAF. Sweden has a long history of neutrality, which aided us in avoiding both WW1 and WW2. So, why are Swedish military forces in - of all places - Afghanistan?

Why are Japanese military forces not in Afghanistan?

Ichiro Osaza had this to say, according to The Japan Times, in 2007:

Ichiro Ozawa, president of the Democratic Party of Japan, said Wednesday the Self-Defense Forces' participation in NATO's International Security Assistance Force in Afghanistan would not violate the Constitution, contrary to the claims of the Liberal Democratic Party-New Komeito ruling coalition, which has rejected his proposal.

During a news conference, Ozawa pointed out that Japan is a signatory of the U.N. and activities authorized by that body, including the ISAF, should not, therefore, be viewed as unconstitutional.

"Japan became a member (of the U.N.), promising to answer to its every possible demand, to give its full cooperation," Ozawa said. If joining the ISAF activities is unconstitutional, "that would make (Japan) a liar. That would mean that Japan's Constitution and the U.N. Charter are inconsistent.

What he actually may have wanted is to put an end to the American-led Operation Enduring Freedom-Whatever-Maritime-Interdiction-Operation, which was not authorized by the United Nations.

Swedish TV documentary from 2007: Swedish Women in the Army (English Subs) - Part 1/3 - with unique insights if you ever wanted to be a part of the action in rural towns in northern parts of a country that has been repeatedly attacked by every major power...

I am having difficulties establishing just who Imperial Japan would have had those close diplomatic relationships back in 1931. Wikipedia has this:

Sardar Mohammad Hashim Khan (1885?-1953) was a political figure in Afghanistan. He was the uncle of Mohammad Zahir Shah and the elder brother of Sardar Shah Mahmud Khan and Sardar Shah Wali Khan.[1] Hashim put into effect the policies already orchestrated by his brothers. Internal objectives of the new Afghan government focused on strengthening the army and shoring up the economy, including transport and communications. Both goals required foreign assistance. Preferring not to rely on the Soviet Union or Britain, Hashim turned to Germany. By 1935 German experts and businessmen had set up factories and hydroelectric projects at the invitation of the Afghan government. Smaller amounts of aid were also offered by Japan and Italy. He governed Afghanistan as Royal Prime Minister from November 14, 1929 until May 1946.

Japanese people here who pay attention to Afghanistan affairs are more likely to remember the epic photo of Kazuya Ito.

Michael Penn: The Slaying of Ito Kazuya: Japan in Afghanistan

Ito had gone to Afghanistan as an agricultural specialist for the Peshawar-kai, a Fukuoka-based aid organization whose long experience in the region dates back to 1983. His main work was to identify and grow crops such as sweet potatoes, tea and hay that could take thrive in the barren Afghan soil that would thrive in the local area. This was part of the effort to reduce dependence on the poppies used to make opium and heroin and boost villagers’ incomes. As one of his Afghan colleagues noted, “He wanted to expand legitimate agriculture.” He also worked on constructing a twenty mile irrigation canal from the Kunar river to a desert area. By all accounts, Ito adapted very well to life in Afghanistan, gaining a working command of the Pashtun language and seeming comfortable in his surroundings. His Japanese friends began to think that Ito might spend the rest of his life in Afghanistan. That indeed became the case, although not in the sense they intended.

This just breaks my heart. The small NGO that Ito joined and wanted to help has a website (of course) and goes back to work that Dr. Tetsu Nakamura was doing in the region since 1983, mainly on Hansen disease patients and malaria:

In 1984, Dr. Nakamura was assigned to Peshawar Mission Hospital in the North West Frontier Province (NWFP), Pakistan. At that time the Hansen's disease ward of the hospital was treating patients without sufficient medical equipment and without adequate facilities for carrying out operations.

In 1986, we began to treat Afghan refugees who had fled to Pakistan. Later, in December 1991, we opened a satellite clinic in Dara-e-Noor in the north-eastern mountainous area of Afghanistan as a base for further work in the country. This was our first clinic in Afghanistan. Subsequently, two more clinics were built in the north-eastern regions of Afghanistan. Since then we have provided medical services to the people in villages in mountainous regions, who previously had no access to medical institutions.

After an outbreak of malignant malaria hit the Dara-e-Noor area in 1993, we launched a large-scale fund-raising campaign in Japan to purchase anti-malaria drugs. Thanks to more than 20 million yen of donations from people throughout Japan, as many as 20,000 patients were saved. 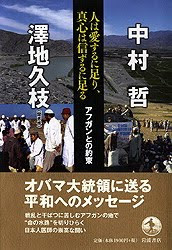 Dr. Tetsu Nakamura, who heads a nongovernmental organization that helps with recovery efforts in Afghanistan, has described his life and activities in the area for the past 25 years in a recently-released book.

Nakamura, 63, leads Peshawar-kai, which has been actively engaged in reconstruction activities in Afghanistan including digging wells and building water channels.

In the book, titled "Hito wa aisuru ni tari, magokoro wa shinzuru ni taru: Afghan to no yakusoku" (All people need is love, all sincerity needs is faith: A promise with Afghanistan), Nakamura tells his interviewer, nonfiction writer Hisae Sawachi, about several little-known private episodes, including those about his son, who died from illness, and his parents.

Tom O said…
All due respect but what is ANYONE doing in Afghanistan?? Historically its always been the same, lest we forget why the 1980 and 1984 Olympics were boycotted by whoever, the Soviet invasion of said country. Ten years and even they had had enough, pulled out without victory. Just trying to think of where the money to train the anti-Soviet forces came from...

Of course, it really does break ones heart when people of the like of Ito-san just want to make a difference. Guns and roses, ne.
6:40 pm, August 30, 2010

Tom O said…
Btw, where can one obtain a spoonfork?? I want one.

Pandabonium said…
Not so sure about Swedish "neutrality" in WWII (or of Swiss either - they both dodged overt involvement is about all), but that is to be off the point of this post.

As Tom said, "what is ANYONE doing in Afghanistan?". The individuals who go to do "good" (not including religious zealots in this) are commendable. But we all know why nation states have been, are, and will be there - resources. In this age, they are there for access to fossil fuels, minerals, and strategic military control of the region. (Another major reason for the US/CIA/Wall Street is the drug trade, but that is a very long story).

Japan has been active - diplomatically and business investment-wise in the area for the last several years. Under previous administration it has also schlepped American troops around Iraq in its transport aircraft - an obvious violation of Article 9.

So, keep the observations coming and keep resisting those who would drag Japan into the milieu of occupying nations.
7:11 pm, August 30, 2010

TenThousandThings said…
"The Giant Buddhas" is a stunning, heartbreaking film that juxtaposes Afghanistan before the Soviet invasion to now: http://www.giant-buddhas.com/en/synopsis/

It reminds us that Afghanistan was one of the cradles of Buddhist civilization. Xuanzang visited this area when he went in search of more authentic forms of Buddhism than what was being taught and practiced in China during his youth.

This photo essay, "The Most Beautiful Thing I've Seen in Kabul" by Aaron Huey profiles a yoga teacher and the beautiful orphans she taught and practiced with: http://www.afghanistan-parsa.org/articles/the_most_beautiful_thing_in_kabul.php The level of their humanity, dignity, and affirmation in the face of forces of violence, greed, corruption that took the lives of the children's parents -- is so beautiful:

Today, the remnants of Afghanistan’s ancient Buddhist history are almost all gone, but the yoga of compassion can still be found in the shadows of this war-torn country. It survives in a way more powerful than the physical beauty of the grand facades destroyed at Bamyan, and more valuable than any Buddhist statue destroyed in the Kabul museum. Compassion is alive and well in a cold, crowded, forgotten orphanage in Kabul. It is alive in the hearts and minds of a dozen children who lay still with eyes closed, palms outstretched, and smiles creeping across their faces.