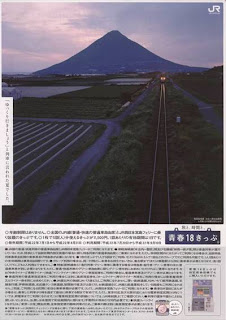 Regular readers of Kurashi know I like trains, and local trains are a great way to get around in rural Japan. Sure, Shinkansen gets you from A to B really fast, but you may want to see a bit more of the country than the high speed allows for. Also, many great traditional towns and historically fun places (as well as hot spring resorts) are off the much-beaten flashy-new trunk line track.

I visited Takayama over the past few days as my old friend Tom was ending his first WWOOF stay/organic farming/weeding-in-the-35 C-sunshine-experience in Gifu prefecture. We decided to get the incredibly cheap Seishun 18 Tickets to get around on a lazy, hot August day, with the occasional thunderstorms thrown in for added excitement.

The Seishun 18 is a deal where you buy five tickets for unlimited use on local trains. From Wikitravel:

The ticket is actually five one-day passes condensed onto a single piece of ticket stock. When using the ticket for the first time, the passenger presents it at the manned ticket gate, and the employee on hand stamps the ticket, making it valid on every non-express JR train until midnight. After midnight, the ticket becomes invalid unless it is stamped again. The ticket has spaces for five stamps, after which it is invalid.

More than one person can travel on the same ticket: each of the five spaces on the ticket allows one person to ride for one day. For instance, if two passengers were using the ticket, the ticket would be stamped twice; at the end of the day, both passengers could use the ticket for another day and have one stamp space left over, or one of the passengers could use the ticket for three days. Likewise, a group of five could travel for one day on a single ticket: the cost would be only ¥2300 per person, which, for example, is more than 70% off of a regular one-way fare between Tokyo and Osaka.

We started out from Takayama and went south on the JR Takayama Line, which is truly scenic. You can go the other way too, starting in Nagoya, and the track passes green hills, rice fields and Miyagawa river. The sweeping curves, the bridges and all the tunnels must have required a lot of engineering work too, and credit goes to every worker who made this possible. The line was completed in 1934 and I personally think it must rank as one of the world's top ten rail trips. Then we changed at Mino Oota, and got on the Taita Line, heading east for Tajimi. Then the next line to look for is the JR Chuo Line by the gorgeous Kiso River, towards Matsumoto in Nagano prefecture...

However, at Shiojiri station, we were in a bit of a hurry, hoping to make it back home that night, not wanting to miss our last connection. But, because of the heavy rain, the Kiso Fukushima Line was delayed and we were stuck for an hour at Nagiso station, which was a nice break, but... This is where the station masters at Shiojiri really came through for us. They managed to figure out a way for us to combine the Seishun 18 ticket with - paying only 2,600 Yen extra - the express train back towards Tokyo. We didn't want to pay a whole lot and use the express train all the way back, say to Shinjuku, but this saved our skins and we even managed to catch an earlier connection and made it back home on time in style. All thanks to the quick thinking at Shiojiri station!

And so it goes.

Using the 18 Seishun makes all of this possible at a real bargain, plus you don't have to stop and purchase tickets at each place where you may need to hurry to catch the next connection.

Why not use the more famous JR Rail Pass, you may ask. Good question! For those of us who live and work in Japan, we actually cannot purchase the JR Pass, because we do not have Tourist status stamped in our passports. Not exactly logical, since we are also cash-paying tourists with a yen for travel around this country. But that's how it goes. If you want a fun, cheap train trip holiday, get the Seishun 18 Ticket instead!

Japan National Tourist Organization has greatly improved its website, with maps and helpful train guides. Do have a look for inspiration. Here is their page for Hida Furukawa, a small town we visited on my birthday last week.

Even more trains on Pacific Islander: Peekaboo Fuji-san from a recent trip to Koya-san in Wakayama prefecture

Pandabonium said…
Wonderful way to travel, especially with your enjoyment of awareness and appreciation of the places and people along the way. Helpful station staff when you felt stuck was a bonus.
8:30 pm, August 17, 2010

Martin J Frid said…
The staff were great, but the heavy rain was a problem. Some non-Japanese-speaking travellers were in quite a bind.

I helped the staff out, and wrote down some sentences they may want to use in similar situations, and it was much appreciated. Made me wonder why JR doesn't provide a simple language guide to its local staff...? There is a business idea there somewhere!
12:24 am, September 05, 2010