Anarchy (not) in Akihabara 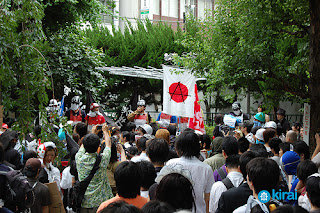 Liberate Akihabara? The demonstration last weekend was a mixture of otaku and cosplay, with some serious activism as well. "Stop the PSE law" or The Product Safety of Electrical Items was one of the hot topics, as the Japanese PSE law may ban the sales and the resales of old electronics. Others demonstrated for queer rights and of course, Henry the Horse, dances the walz, as the police (in their cute blue uniforms) was on standby.

Not much happened, as otaku are usually better at expressing themselves in front of a computer, but there are lots of photos at the Jabro Blog.

Danny Cho (a blogger who dresses up as a Star Wars Storm Trooper) and Hector (Spanish blogger who calls himself un geek de Alicante que está viviendo en Japón) have more photos and grainy videos than you would ever want to watch of this event. He says:

...around 1.000 otakus joined the march against otaku discrimination. They claimed respect from traditional media that sometimes treats otakus people in general as “criminals” and also the “liberation of Akihabara and otaku emancipation”. Lately many big department stores are conquering Akihabara, little shops are disappearing, and with them the “authentic Akihabara spirit” is also being destroyed. 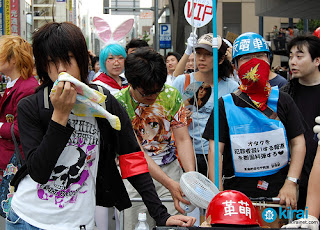