There are actually quite a few buildings in Japan designed or inspired by Frank Lloyd Wright, as mentioned in P's fascinating post previously here on Kurashi: Magnificient Obsessions (thanks!) 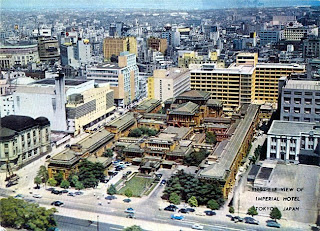 The Imperial Hotel in central Tokyo was a landmark until the late 1960s.

Old Tokyo has some wonderful photos from postcards, that I imagine some of you may have in your grandfathers' collections... 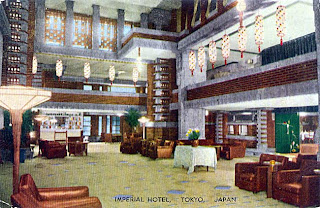 Wow, have a look at that luggage sticker - Imagine having that on your suitcase back in the 1920s or 1930s!


Here is the entrance of the Yamamura House in Hyogo prefecture, also known as the Yodoko House.

But this is also about people. Arata Endo was one of the Japanese architects who studied Wright's philosophy. This helped him to build his ideal view of organic architecture: "to find a point where humans and architecture meet, to make architecture the art based on everyday lives, and not to classify architecture into practicality, science or art." 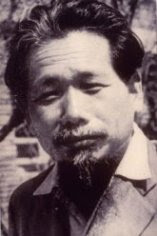 I think Frank Lloyd Wright was very lucky to meet students in Japan, such as Endo, who probably taught the teacher more than we will ever know.

More photos on the Wright in Japan website, a NPO that wants to foster greater cultural awareness of Frank Lloyd Wright's enduring architectural legacy in Japan through the collection, management and deployment of Wright-related documents and artifacts. 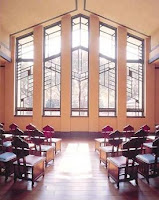 Endo and Wright collaborated to design the Jiyu Gakuen, a famous school in Ikebukuro, Tokyo. Wright extended his congratulations for the opening of the school in 1921 by sending a following message: