The environment has been one of the key issues on Hu's agenda during his Japan visit. On Wednesday in Tokyo, Environment Minister Zhou Shengxian and Japan's Environment Minister Ichiro Kamoshita signed a document agreeing to cooperate on wastewater treatment projects in rural China. Pilot schemes, aimed at reducing the amount of pollutants discharged into the Yangtze River, will begin this year in Jiangsu and Chongqing. Under the agreement, Japan will set up drainage disposal facilities, including water purification tanks, in the two regions. Seminars on wastewater disposal technology will also be held in China.

JFE Group has said it will share its environmental protection expertise with some Chinese cities, including Beijing, Shanghai, Dalian and Guiyang.

Hu's last engagement before boarding a flight home was a visit to the Osaka headquarters of Matsushita Electric Industrial Co., among the first Japanese companies to operate in China, to observe environment-friendly technology.

Environmental Reports at JFE Group. Created in 1954, the JFE Steel Sheet Group has 5 plants in China. 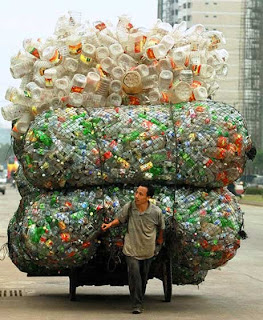 Top photo from JFE Holdings, I suppose that is the factory President Hu visited - JFE developed and commercialized the world's first integrated waste plastics recycling system, and when you throw away a PET bottle, you can only hope that it reaches JFE Kankyo Corp. where they have the technology to recycle it.