Korea: No to US Beef 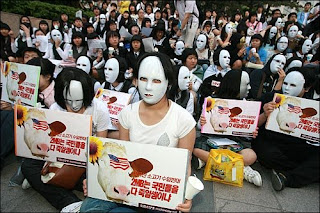 Thousands of Korean residents held a candlelight rally at the plaza in front of the Cheonggye stream in central Seoul, Friday.

Korean consumers are opposed to the full opening of the market to American beef, due to concerns about mad cow disease. Some 600,000 people have signed the petition on Daum, one of the largest Internet portal sites in Korea. 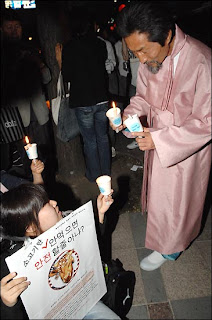 Update: The protests in Seoul are continuing today on Saturday, turning into a manifestation against the current president, Lee Myung-bak, jokingly called "2MB" as a reference to his short memory. Seems president Lee got to meet president Bush at Camp David in return for reopening the Korean beef market. Not a particularly bright idea: Koreans are very sensitive about their sovereignty.

In November, 2006 I met some of the leaders of this anti-US beef campaign: they know a lot about the problems with cattle in the US.

As I wrote back then: Dr. Mike Hansen from the U.S. Consumers Union had a lot to say about the situation at U.S. meat plants. Virtually no safety testing is going on and unsafe feed appears to be the norm. And just today, there is news that bone fragments were found in in a package of meat during quarantine inspections.

Kurashi: Lots of Protests in Korea 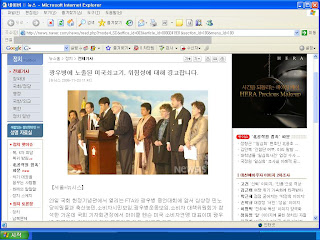