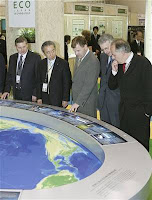 Standing in front of Maps of "Japanese environment technologies expanding to the world" as they visit the Environment Fair in Kobe, what where these ministers* really thinking?

European and developing countries urged the United States and Japan on Sunday to commit to deep cuts in greenhouse gas emissions by 2020. But all they could agree was to make 50% reductions "by 2050". Wake up guys. That's LATE. Did John F. Kennedy say, "Hey lets put a man on moon by the end of the 21st Century" - No, he said, lets do it by the end of the decade. By setting a tough deadline you get things done. In my opinion, 2050 is not a deadline. They might as well have said, "Sorry, we don't know what to do, we can't agree on anything, and we accept the blame." And then they should have all resigned.

Reuters notes that some environmental activists said the ministers had made progress -- but not very much:

"We're at the point where there needs to be a very ambitious message out of the G8 summit for international talks on climate change to move forward," said Mika Obayashi of the Institute for Sustainable Energy Policies, an NGO.

"So in that sense, this meeting was just a quarter of a step forward. They didn't specify where they would set targets in the long-term, nor did they go beyond saying that mid-term targets should be effective."

"Kobe gave ministers the opportunity to accelerate the slow progress of G8 climate negotiations, but they failed to send a signal of hope for a breakthrough" at the July summit, said Naoyuki Yamagishi, head of the Climate Change Program at WWF Japan, in a statement.

* The United States is one of only a few major countries in the World that still doesn't have a proper Environment Ministry. The US Environmental Protection Agency represented the US at this important meeting, but note that they didn't even send the director, but only the EPA's deputy assistant administrator, Mr. Scott Fulton, to Kobe.
Climate change Events G8

Pandabonium said…
There isn't time to screw around like this anymore. Somehow we must bring pressure to bear on those who can make the big changes as we each, individually, do our part.
5:37 pm, May 29, 2008

Martin J Frid said…
Imagine any other government ministers, meeting like this and not really being able to agree on anything except "Oh, trust us, by 2050 we'll have it all sorted out".

Unfortunately, it is one country that blocks the progress. The United States of America is not interested in the future. Too bad Japan, the world's second largest economy, doesn't have the guts to just ignore the deputy assistant administrator of that country, and propose something that the rest of the world might be inspired by.
1:34 am, May 30, 2008

Pandabonium said…
Indeed. They are all aware of what is going on, but can't seem to break away from their outmoded paradigms.
11:03 am, May 30, 2008