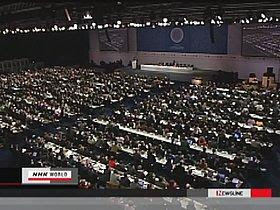 The COP 15 meeting in Copenhagen has started and Japanese media seems a little unsure about what they should report: NHK World lets Japan Business Federation Chairman Fujio Mitarai express "dissatisfaction over targets for greenhouse gas emission cuts announced by Europe and the US, as well as by China." Exactly what you would expect from Keidanren, but why is this one of the top stories tonight at NHK:

Mitarai was speaking to reporters on Monday, hours before the opening of the United Nations Climate Change Conference, known as COP15. The conference is aimed at creating a new framework on climate change to succeed the Kyoto Protocol, which expires in 2012. The United States unveiled a mid-term goal of a 17-percent reduction in greenhouse gas emissions by the year 2020 from 2005 levels. The European Union set a goal of up to a 30 percent reduction from 1990 levels. Mitarai said judging from the costs, these targets are too low. China, the world's largest emitter of such gases, has announced that it will reduce the intensity of its carbon dioxide emissions per unit of GDP in 2020 by 40 to 45 percent, compared with the level in 2005. Mitarai expressed his appreciation for the announcement but said the calculations suggest that China's greenhouse gas emissions could soar by 70 percent from the 2005 levels. He said that China, as a major emitter, must act in a responsible manner.

Asahi is perhaps more sober, with a top news posted at 00:00 at midnight indicating that governments aim for a "Post-Kyoto" agreement. Asahi has more over at their World Environment Forum website. They also have updates and articles (in Japanese) over at their special Asahi Eco pages.

Mainichi has more detail, with a quote from prime minister Hatoyama, who says he will adjust his schedule because he wants to have talks directly with US president Obama - but actually, the issue of the relocation of the US Futenma military base may be higher on his agenda. Japan's government is making sure that Hatoyama will meet Obama in Copenhagen, no matter what, but if they will discuss climate change or not is not mentioned.

Update: Nikkei also confirms that "Prime Minister Yukio Hatoyama said Monday that the government would inform the United States of its policy on the relocation of the U.S. Marine Corps' Futemma Air Station in Okinawa Prefecture by Dec. 18, when he may meet with U.S. President Barack Obama in Copenhagen..." with no additional news about climate change or a post-Kyoto deal.

Ito Yoichi over at Nikkei Bio Japan, with plenty of opinions about BRIC (Brazil, India and China) hopes that he will live to see a great week with many surprises in Copenhagen, as the US and China have already started to make noise to the effect that "change" may be possible, he notes.

Ten Thousand Things, a blog I like, has more about the US bases in Okinawa.
Climate change Events Kyoto Okinawa

Anonymous said…
Thanks for the links. I'll be keeping track of COP15 via Climate Progress and WWF. Although I don't think I know any Japanese blogs that give regular updates to the affairs (aside from Google News).
8:12 am, December 08, 2009

Martin J Frid said…
Thanks for the comment apeescape (?) and I like your Achikule blog. However I was unable to comment because your setting seems to require a google login.

I wanted to mention Jenniifer Chan's wonderful book "Another Japan Is Possible" anout grassroot environmental activities, as an addition to your post about Green Conscience. The data from the study that compares Japan and Germany seems a bit outdated - a lot has happened in the past decade.
3:09 pm, December 08, 2009

That is very weird that it requires a Google log-in. My blogging platform is Wordpress, and it should only require a username and an email address.

>Japan and Germany seems a bit outdated - a lot has happened in the past decade.
I haven't had the chance to thoroughly read the book that I reffed to (Hasegawa) and it might be a good resource on updated info. on Japanese green NGOs. Although the Greendex data seems to reaffirm the lack of eco-action in Japan.
5:27 pm, January 29, 2010