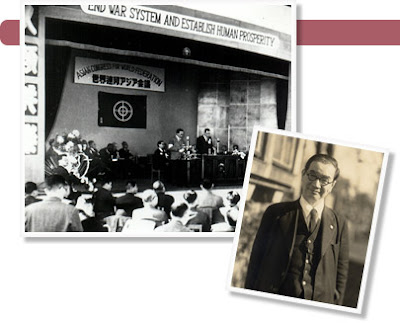 Japan has a large and very developed alternative cooperative movement, the food Co-ops. More than 14 million people are part of one Co-op or - at some point at least - approximately 1 in 5 of all Japanese households belongs to a local retail/consumer Co-op. 90% of all Co-op members are women.

Another way to count: Nearly 6 million households belong to one of the 1,788,000 Han groups (Japanese Consumers' Co-operative Union., 2003). These consist of a group of five to ten members in a neighbourhood who place a combined weekly order which is then delivered by truck the following week.

A particular strength of Japanese consumer co-ops in recent years has been the growth of teikei or community supported agriculture where fresh produce is sent direct to consumers from producers without going through the market.

Here are a few Co-ops:

After the end of the war in 1945, when the country experienced severe food shortages and exceptional inflation, Co-ops were established across Japan. In 1947, about three million people became members nationwide. In 1948, the law for consumers' cooperative union was enacted and in 1951, Japan Consumers' Cooperative Union was established.

Co-op Kobe has roots from 1909 and was inspired by people like Christian leader Toyohiko Kagawa. While also thinking deeply about the difficulties of farmers, he nurtured a desire to create a better society in the 1930s. He also founded a peace movement after WW2. He was a prolific writer and some has been translated (1931):

There is no commoner phrase in Japan than "shikata ga nai," "it can't be helped." Everybody uses it. But we must be people who can say, "It can be helped!" no matter in what circumstance we may be. A man often deceives himself by saying he has faith, and at the same time saying, "It can't be helped!" If you advise a person leading an irregular life to be a little more careful, he will say, "This has become a habit; it can't be helped," and in saying so he will consider he has justified himself. He is an example of what is called character-determinism.

生活協同組合コープ (seikatsu kyoudou kumiai coop) is the Japanese term for the cooperative movement, including the word seikatsu which means living or livelihood. Very close to the meaning - and heart - of kurashi.

K and S said…
I really like our neighborhood co-op, though sometimes the price is a bit higher than the supermarket, you know their products are safe.
8:58 pm, February 22, 2010

It's amazing to me to see how supported and successful co-ops are in Japan.

Kagawa also had a profound impact on the consumers cooperative movement in the US. And thousands of Japanese co-op staffers visited the US since the 1950's to study facilities, merchandising, and distribution. There was a very positive cross-fertilization between the US and Japan in co-op history.

I'm not sure if co-ops are successful or widespread in the US anymore. The huge Consumers Coop of Berkeley (which once had a membership of 100,000 families in 1980) is no longer extant.

Kagawa was very well-known in American Presbyteriand and Christian circles and traveled the US often to speak on peace as well as social justice issues. He was a labor rights advocate as well--and chose to live in the poorest neighborhoods of Osaka in the 1920's.

His attempts to prevent Japanese aggression before WWII and to preserve peace, stop nuclear testing during the Cold War are inspiring.

You knew I had to add this. Kagawa Toyohiko was a friend of my grandfather :)

I stumbled across your post because I am doing some research around Japanese cooperative supermarkets. I found your post interesting and wondered what your sources were (I realise this was posted a while ago!)

I am interested in finding out what the main cooperatives are (how does CCIJ differ from JCCU and how does Pal System, which I take to be quite popular,fit in to these?).

I would appreciate any reply!