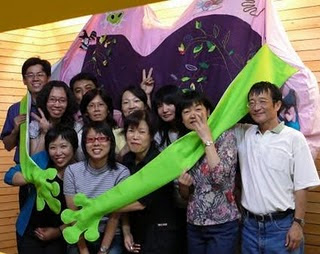 Jen over at Ten Thousand Things writes: In times of conflict and misunderstanding, art provides a transformative and healing power that enables people to overcome personal and interpersonal divides.

Art has also supplied the glue that bonds friendships together that may never had stuck without it. To that effect, the Biennial Global Art Project has been providing a common canvas for friendship building and mutual understanding for eight years. The ninth GAP facilitated art exchange will take place in March and April 2010.

Nominated for a UNESCO Peace Prize for Tolerance and Non-violence, GAP matches artists (professional or amateur, performing or visual, individual or groups) with like-minded people from other countries. In March, each participant creates a piece of artwork to be exchanged by mail with an overseas match, resulting in thousands of messages of peace and goodwill simultaneously encircling the Earth during the week of April 23-30th. The works of art are then displayed locally with the purposes of promoting tolerance and friendship across cultural divides. Check out previous galleries or order prints of previous art work by clicking here.

Over 90,000 people have already participated in GAP worldwide, including people in Japan:

* A group from the International Division of Mino, Osaka’s Community Education Center used washi paper for their collage in their exchange with a high school the U.S. Yoko Matsuda of Osaka said that although the members of her group had no art training whatsoever, they decided to participate because they were impressed by GAP’s message of global unity.

* A troupe of 80 dancers called the International Dance Network choreographed and recorded a performance for exchange.

* 280 people represented Hiroshima, a city which serves as a symbol of peace, reconciliation, and healing after the path of non-violence it chose after surviving U.S. atomic attack, with their submission of an art project for peace.

Do check out the gallery at the Global Art Project website. Such an inspiration!
Art Hiroshima Peace