When The Saints Go Marching In, The Numbers Don't Add Up 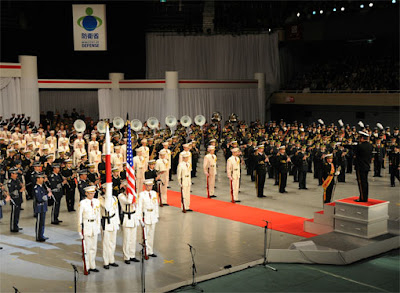 When I worked for NHK World a couple of years ago, we often had to report news about the Air Self Defence Forces (ASDF) and their "humanitarian aid" mission to Iraq and Afghanistan, which ended in March 2009. It was first reported in Japanese and English, and the rest of us translated the segments into other languages, and then our job was to read the news live on-the-air. The Swedish, German, and Italian broadcasts have since been terminated, and I now longer go to Jinnan in Shibuya to sit behind a short-wave microphone in one of the musty old NHK studios.

But recent revelations about the "humanitarian" aspect of the airlifts are deeply troubling. According to an official report, Japan's ASDF were engaged in quite different activities that are not normally called "humanitarian aid."

Here are the facts from an article by David McNeill on Japan Focus:

In the absence of official investigation, much of the digging around in the war’s darker corners has been done by grassroots activists. Kondo Yuriko recalls her surprise that the state's democratic machinery eventually produced results.

Her three-year demand for information on how the Japanese government had spent billions of taxpayers' yen supporting a "humanitarian mission" in Iraq from January 2004 through to the end of 2008 had been partly, if belatedly, answered. And it was worth the wait.

In late September 2009 new Defense Minister Kitazawa Toshimi unexpectedly authorized the release of a short document under the Freedom of Information Act disclosing that about 67 percent of the 26,000 soldiers transported by the Air Self-Defense Forces between July 2006 and December 2008 wore U.S. uniforms. That is, the ASDF was transporting U.S. forces into and out of combat.

Secrets and Lies: Ampo, Japan’s Role in the Iraq War and the Constitution

Now, this is all very strange. If you have a look at the website of the Ministry of Defence, and for example their English newsletter called Japan Defence Focus, the numbers just don't add up:

Achievements of the ASDF

"Humanitarian aid" is a nice term. It gives you an image of good people doing good things. But we have no idea what the American soldiers on those Japanese Kawasaki C-130 ended up doing on their different (and probably very difficult) missions. The point is, they were likely military missions, not humanitarian missions. That is a very large difference.

Too bad the Japanese government and NHK decided to lie to the people, not only here in Japan, but to all the listeners around the world who tuned into our radio broadcasts as well.

(Image from a "SDF Marching Festival" held at Budokan, Tokyo in 2008)
Peace

Tom O said…
Its not quite The Beatles, is it!

L said…
check out my iphone/ipad app that teaches how to play this song on the piano …
Its all for a good cause!
http://www.youtube.com/watch?v=H1ttgKUc98Y&feature=related
www.appsforhunger.com
10:57 pm, July 08, 2011