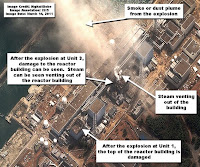 I hope other countries around the world also follow this news and stop building new nuclear power stations, and move towards a nuke-free planet (from NHK):

Japanese nuclear power plant operators have shelved plans to build 2 plants in northern Japan, in light of the nuclear crisis unfolding at the Fukushima Daiichi plant.

On Thursday, Tokyo Electric Power Company, which was due to start building one plant in Aomori Prefecture next month, has notified the local government of its decision.

The No. 1 reactor of the plant was expected to go online in 6 years, with a projected capability of 1,380 megawatts, making it the most powerful in Japan.

Another plant operator, Electric Power Development, said it has put on hold the 3-year-old construction of a plant, also in Aomori.

That would have been the first in Japan to burn a mixture of uranium and plutonium extracted from spent fuel. The target year for its completion is 2014.

There is also news that Germany and other countries are re-thinking their plans for future nuclear power plants.

Based in Tokyo, the Citizen`s Nuclear Information Center (CNIC) has a network of scientists, activists, and common citizens, who work to create a nuclear free world.

Statement re the Nuclear and Earthquake Disaster Unfolding in Japan

The Citizens' Nuclear Information Center (CNIC) is deeply concerned for the health and safety of the people affected by the earthquakes and tsunamis that have struck Japan over the last two days. We are particularly concerned for the people in the vicinity of nuclear power plants, including workers who are trying to minimize the scope of the disaster.

Unit 1 of the Fukushima Daiichi Nuclear Power Plant is in a state of meltdown. A nuclear disaster which the promoters of nuclear power in Japan said wouldn't happen is in progress. It is occurring as a result of an earthquake that they said would not happen.

This could and should have been predicted. It was predicted by scientists and NGOs such as CNIC. We warned that Japan's nuclear power plants could be subjected to much stronger earthquakes and much bigger tsunamis than they were designed to withstand.

Besides the question about how this accident will unfold, the big question now is, will the government and the nuclear industry acknowledge its mistakes and change track?

Last December the Japanese government began a review of its nuclear energy policy. The review was commenced in the spirit of essentially confirming the existing policy. That approach is no longer viable. The direction of the policy review must be completely reversed. It must be redirected towards developing a policy of phasing out nuclear energy as smoothly and swiftly as possible.

No post like this would be complete without Pink Floyd, Set The Controls For The Sun (from Umma Gumma) or how about Atom Heart Mother, from that era when it all seemed possible:

It seems the TEPCO should bear corporate social responsibility to give back to society what it has taken away by putting us at risk from its nuclear endeavors and the social risk that we will all have to bear regarding the presence of radiation in our lives for possibly decades to come.

My hope is that TEPCO will take all the money it had reserved for future facilities and use it to create a new solar power infrastructure with panels on every home in the region. In exchange for using the space on our homes, we will be allowed to use all the energy for free and sell back the surplus energy to TEPCO; if we require additional energy, then we can purchase more from TEPCO.

This solar power infrastructure could benefit the company with a certain degree of profit, benefit society by drastically lowering our energy bills, benefit the environment by using clean renewable energy, and, last of all, be extremely safe.

Moreover, building such an infrastructure would catapult the country forward in the new age of sustainable energy usage and generation.
11:46 am, March 20, 2011