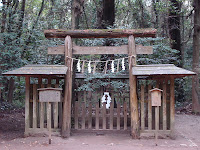 The huge earthquake and the tsunami are having a huge effect on most of Japan today. There are many after-shakes and even the small ones rattle the nerves if not the buildings. Tokyo is completely shut off and people working in the city cannot go home. Electricity is down and in many places, no mobile phone access (I can't use Vodaphone except for sms messages).

I probably live in one of the safest towns, up in the hills in central Saitama, way north west of Tokyo. I was planting potatoes and broccoli when the 8.9 quake hit. Had to sit down and wait, impossible to stay standing.

I had just had some major trouble with long roots that had to be tugged out to clear the soil. When I told Panda Bonium about this, he wrote:

> It's all your fault! You tugged at something connected to the Kanameishi
> stone and let loose the carps.

That's a good joke considering the circumstances. The Kanameishi refers to a special stone at an ancient shrine in Kashima, Ibaraki Prefecture, which since ancient times have been thought to be directly connected to Earth Central and other-wordly forces, and should not be moved, or earthquakes may happen, due to something related to magic carps...

I'm ok and so are most of the people I know, except for people working in Tokyo, who cannot go home tonight. NHK reports that the official advice is to stay put, and not try to walk home (it is very cold tonight):

Chief Cabinet Secretary Yukio Edano has called on people in the Tokyo metropolitan area who are away from home to wait in safe places such as their offices.

Edano said at a news conference on Friday that the massive earthquakes have halted rail and other transport in the area and it is not known when they will be restored.

He warned that overcrowding on sidewalks could make it dangerous to try to walk home.

He added that some people walking may fail to receive the latest quake information, and have difficulty accessing food, water and bathroom facilities.

Martin J Frid said…
Thanks for the comment. I am ok but there must be hundreds of thousands if not millions who are having a very hard time tonight.
9:54 pm, March 11, 2011

Tom O said…
Well apparently all the conbini's are open, for as long as they can be but at least there is no shortage of them. Crack open some beers/sake, make some new friends and stay tuned to the radio for the latest news.

Jeeze, so it was some long roots in the Saitama area - ki o tsukete, ne!

Of course, one hopes that the majority of foreign residents in relevant areas do have the Nihongo ability to understand the latest and ongoing messages - if not, then this a good time to start that benkyou, ne.
1:23 am, March 12, 2011

Martin J Frid said…
Thanks for the comments and sympathy. Yes, Ibaraki pref. was hit quite badly with electricity outages and no water. I have gotten emails from most of my friends there and they are ok, if still in a state of shock.

Note that Tokyo and the rest of Japan have not been affected and the damage is up along the coast, not in the entire country. Osaka, Nagoya, Kobe, Kyoto and Shikoku and Kyushu, as well as Hokkaido, are ok.
2:43 am, March 14, 2011