Wind Power In Japan? Asia Doing Much Better Thanks To China 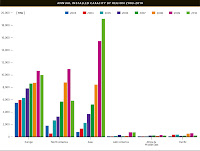 How should Japan reduce its dependency on imported oil? While solar panels are popular, wind power is less so. Japan ranks 18th among nations in new wind farms, according to The Japan Times. Japan only placed 18th in the global rankings for new wind power installations in 2010, creating 221,000 kw of renewable energy. Compared to the global output capacity of wind farms, which increased to 194,390,000 kw in 2010, Japan is just above 1% of global wind energy production.

Global wind power installations increased by 35.8 GW in 2010, according to figures released by the Global Wind Energy Council today. This brings total installed wind energy capacity up to 194.4 GW, a 22.5% increase on the 158.7 GW installed at the end of 2009. The new capacity added in 2010 represents investments worth EUR 47.3 billion (US Dollars 65 bn).

For the first time in 2010, more than half of all new wind power was added outside of the traditional markets in Europe and North America. This was mainly driven by the continuing boom in China, which accounted for nearly half the new wind installations (16.5 GW).

“China now has 42.3 GW of wind power, and has surpassed the US in terms of total installed capacity,” said Li Junfeng, Secretary General of the Chinese Renewable Energy Industry Association (CREIA). “This puts China firmly on a path to reach 200 GW of installed wind power by 2020. At the same time, China has become the world’s largest producer of wind energy equipment.”

But other developing countries also expanded their wind capacity, including India, which added 2.1 GW in 2010, Brazil (326 MW), Mexico (316 MW), and 213 MW were installed in North Africa (Egypt, Morocco and Tunisia).

For Japan, this is not great news, but noone is suggesting that wind will replace oil or nuclear energy. I think it may be a good additional source of energy on the local scale. A farm or a local school or even a city hall should have some wind power generating at least a few kW. It is also good awareness-building. As for larger-scale wind power, we may not have the solutions yet to make it viable. But, doing nothing is also not a solution.
China Energy reduce renewable energy

Japan's topography, size, and weather patterns are not as amenable to wind power as many of the countries you name. Where the conditions are right, we should of course take advantage of them. (Nearby Kashima Port and the shores of Kamisu City to my south do this well.) But when judging our progress we must also take into account the limiting factors we face overall here in Japan.
6:01 pm, March 10, 2011

On windfarms, instead of corporations and government sticking up only a few expensive centralized ones, how about random people throughout random communities sticking up a bunch of autonomous ones. They’re likely not to get the best spots and probably be simpler, with half as many moving parts, so perhaps they don’t need to be expensive to build and maintain.