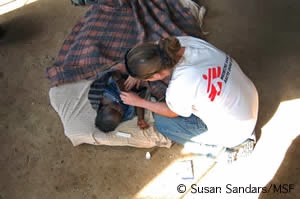 The Trans-Pacific Partnership (TPP) agreement has the potential to greatly diminish access to affordable medicines for millions of people in parts of the developing world, the international medical humanitarian organisation Médecins Sans Frontières (MSF) warned today.

As Japan nears a decision on joining the TPP negotiations, MSF is concerned that discussions in Japan have failed to take into account the impact that aggressive intellectual property provisions proposed by the US could have on access to medicines in countries where MSF works and beyond.

“Our experience around the world shows that MSF's treatment programs – and our patients’ lives – depend on the availability of quality and affordable generic medicines,” explains Eric Ouannes, General Director of MSF-Japan. “If Japan does not properly consider the impact stringent intellectual property provisions will have on patients in the developing world, there is a risk that hard won gains in the treatment of diseases like HIV/AIDS will be undermined”

Encompassing nine countries to start (Australia, Brunei, Chile, Malaysia, New Zealand, Peru, Singapore, Vietnam, and the United States), the TPP is billed as a vehicle for economic integration across the Asia Pacific region and a template for successive future regional trade agreements, including with developing countries. The US proposals would delay introduction of generic medicines in the countries that sign up to the TPP and decrease competition amongst drugs manufacturers.

Competition among generic manufacturers brought the price of the first generation of HIV medicines down by more than 99% over the last decade, from $10,000 per person per year in 2000 to as low as $60 per person per year today. This dramatic price drop has played a major role in helping scale up HIV/AIDS treatment to more than six million people in developing countries.

Stifling generic competition also has implications for Japan’s own foreign aid policies. Japan is a key contributor to the Global Fund to Fight AIDS, Tuberculosis and Malaria which relies heavily on generic drugs. Vietnam, Malaysia and Peru, are participants in TPP negotiations and are all receiving support from the Global Fund.

“Policies that restrict competition thwart our ability to improve the lives of millions with affordable, lifesaving treatments,” said Brian Davies, Coordinator of MSF’s Access Campaign in Japan. “Promoting access to affordable lifesaving medicines in developing countries should be integral to Japan’s trade policies.”

MSF will continue to monitor the TPP negotiations process and its potential impact on access to medicines in developing countries.
TPP