The Flight of the Swans 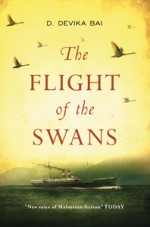 Set in British Malaya and India, The Flight of the Swans is an expansive family epic with a war theme revolving around the vision of a flight of swans or a bird in solitary endeavour that signals a cursed Captain and his family's hurried escape from the hands of the British. This, to face hardships in another land as well as hopeful dreams. Family upheavals, mangled from a wounded political and historical landscape as well as sibling rivalry for the hand of a beautiful courtesan, hold reflection on a new brand of literary Indian writing in Malaysia that rests on ambitious history and vivid description of lives lived and lost through circumstances and bad decisions.

This is a story that deals with the beautiful, the exotic and the tragic.

The Flight of the Swans by D. Devika Bai


In her debut novel, The Flight of the Swans, Malaysian author, D. Devika Bai has painted a richly decorated tapestry of ancient India with marble palaces, magnificent forts, royal procession of elephants, snake charmers, saints and sadhus, villages and glorious kingdoms. She brings to life dead facts and powerful empires in an era of brave rulers. In a family-oriented saga spanning three hundred years, The Flight of the Swans is a story about the Bhonsles, who bravely faced battles, sacrifices and tragedies. The Bhonsles were a prominent Maratha clan, known for their ability as warriors. The most well-known member of the clan was King Shivaji, the founder of the Maratha Empire which helped bring about the fall of the Mughal Kingdom in the 17th century. The Marathas were also the most determined rivals to the British supremacy in India.

Image of front cover from Monsoon, the leading publisher of books and ebooks on southeast asia.