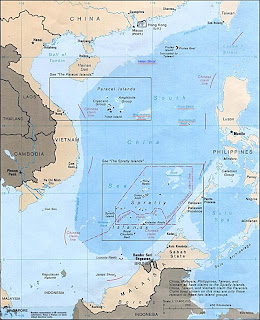 While everyone seems focused on Syria, there is a much more important dispute concerning Communist China and its neighbours in the South China Sea, involving The Philippines, Vietnam, and a host of other small countries. India is also involved, as there may be oil and gas in the area.

My advice? Stay calm and do not let daily news rock your boat. We have more important issues to deal with, such as energy, food security, democracy.

Mark Valencia over at The Japan Times has done a stellar job at uncovering the legal/international law issues.

Over the past few years, the Philippines and China have engaged in a series of increasingly dangerous incidents stemming from their conflicting claims in the South China Sea. On Jan. 22, a potential watershed date in the politics of the South China Sea, the Philippines, with tacit U.S. support, filed a complaint against China with the Law of the Sea’s dispute settlement mechanism — the International Tribunal for the Law of the Sea based in Hamburg, Germany. Despite China’s refusal to participate, the process is continuing and an arbitration panel has been appointed and convened.
However, the arbitration is likely to be a long drawn-out process that may take years — and settle little or nothing.
In an ideal world, the outcome of the arbitration would be based solely on the law and the facts. Both sides would accept it and continue their relations. But this is not an ideal world. Indeed the outcome of this case could have significant political implications for the Law of the Sea’s dispute settlement mechanism, for the Law of the Sea itself and for conduct and relations in the South China Sea and beyond.