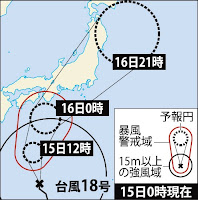 Watch out for more heavy rain both today Sunday and tomorrow, as we have a direct hit over the Kanto region, including Tokyo. The Kinki region including Osaka and Kyoto will get up to 600 mm of rain. Take good care.

Tropical Storm Man-yi, a.k.a. Typhoon 18 will hit land at around midnight or early Monday morning, so there goes the "Respect for the Aged" holiday down the proverbial drain... 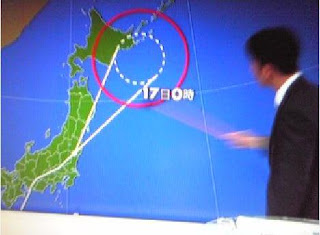 UPDATE 1: At 14:00 on Monday, September 16, the tropical storm is passing Koriyama in Fukushima Prefecture. NHK is reporting strong rains and winds, and JR trains are not running. The storms appears to be heading almost straight for the Fukushima Daiichi Nuclear Plant.

UPDATE 2: The worst damage so far seems to be in parts of Kyoto, with huge areas flooded on Monday, forcing some 150,000 people to move to emergency centers. Kumagaya City in Saitama and some smaller towns in Gunma were also hit by strong winds causing damage early this morning.

Shinkansen and most JR trains in Tokyo have also been stopped since earlier today, and are still not moving by 14:00. 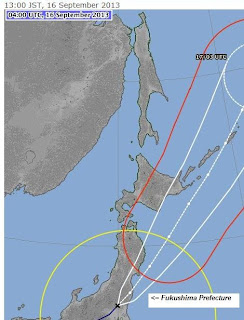