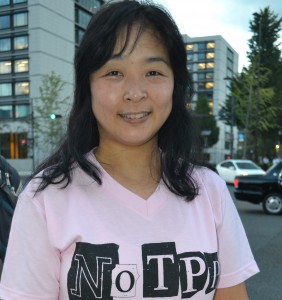 Yoshiko Matsuda has been reporting on the risks of the Trans-Pacific Partnership free-trade talks through a Facebook page, based on information she gathered from people worldwide.

Matsuda says she wants to inform the public on the need to oppose the TPP agreement, using various kinds of ways.

She consistently checks the homepage of the United States Congress and other overseas sources to gather information on the TPP talks, and conveys it directly to members of the Japanese Diet as well as posting it on the Internet. In May, she translated into English the resolutions adopted by the committees of the upper and lower houses of the Diet and the Liberal Democratic Party regarding the TPP negotiations, which urge the government to protect the five key agricultural products including rice and wheat, and sent them to all the members of the U.S. Congress.

Cooperating with Japanese women living in the U.S., Canada and Australia which she became acquainted with through the Internet, Matsuda began collecting signatures for a petition to the White House opposing the TPP agreement.

She received support from Norihiro Suzuki, professor of the University of Tokyo’s Graduate School and a leading TPP opponent, to create a video message asserting the dangers of the TPP talks through sounds as well as printed words, and shares it on the Internet. (...)

Matsuda said it is not enough to merely oppose the agreement, adding that it is necessary to offer theoretical arguments which would sound persuasive also for TPP proponents. She said that instead of just criticizing politicians and the government, she hopes to urge them to work for the benefits of Japan. In order to do so, she said it is necessary to conduct activities based on appropriate strategies and accurate information.

In late August, Matsuda visited Brunei, where the TPP negotiations were held, to gather information on the TPP negotiations and attend briefings for stakeholders. She approached government and industry officials to exchange information and e-mail addresses. According to Matsuda, one of the U.S. negotiators told her that he was impressed by her enthusiasm and that he would convey her message to other negotiators when he returns to the U.S.

In the sessions for stakeholders, where industry officials and citizens’ groups exchange opinions with negotiators of the TPP member countries, she asked negotiators questions she accepted through the Internet, and distributed English version copies of the Diet resolutions to more than 100 people present. She was expected to hold meetings in Japan to present the results of her visit to Brunei.

Anonymous said…
Good of her! and good reporting, Kurashi. I think more people here need to go on the offensive, because the opposite only lends to more pushing from emerging market capitalists.

Pandabonium said…
As you know, Martin, trade agreements have led to disaster for the health of people in many parts of the globe - especially in the Pacific. Leaders of island nations are trying desparately to get governments such as New Zealand to ban the export of high fat meats to Pacific island nations which have become a dumping ground for products that have low demand domestically. This has resulted in a high increase in obesity and associated diseases in the target countries.