Amy Goodman, Colin Crouch In Japan: Revival Of Democracy In The Global Age? 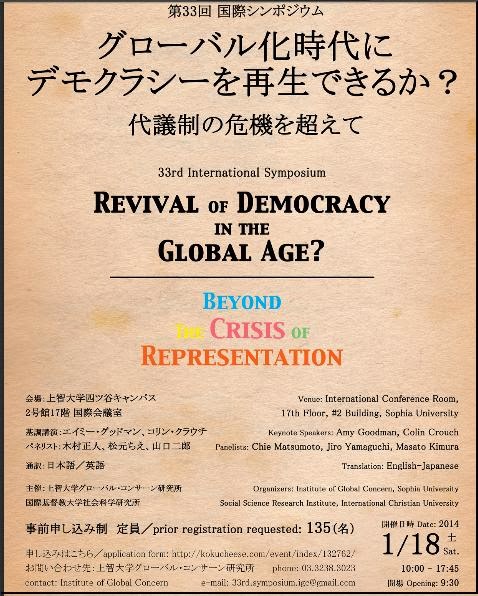 If you follow Democracy Now! you will be interested in the one day seminar at Sophia University in Tokyo on Saturday, featuring Amy Goodman and Colin Crouch as speakers. More information here.

A day-long symposium hosted by the Institute for Global Concern, Sophia University.
Doors open 9:30 am, program from 10 am–17:45.
Featuring keynote addresses by Amy Goodman and Colin Crouch.
Event is free, but pre-registration is required, as seating is limited.
To register, or for more information, call or email:
Phone: 03-3238-3023 (Institute of Global Concern, Sophia University)
email: 33rd.symposium.igc@gmail.com
please cc: all email registration requests to denis@democracynow.org


It has been an interesting week for those who follow the Trans Pacific Partnership (TPP) negotiations as Wikileaks managed to get hold of and share important documents related to the Environment Chapter. Still massive disagreement among the 12 countries that are trying to seal this anti-democratic trade pact, according to the files. Not much yet in Japanese media about this new leak but the New York Times wrote:


WASHINGTON — The Obama administration is retreating from previous demands of strong international environmental protections in order to reach agreement on a sweeping Pacific trade deal that is a pillar of President Obama’s strategic shift to Asia, according to documents obtained by WikiLeaks, environmentalists and people close to the contentious trade talks.
The negotiations over the Trans-Pacific Partnership, which would be one of the world’s biggest trade agreements, have exposed deep rifts over environmental policy between the United States and 11 other Pacific Rim nations. As it stands now, the documents, viewed by The New York Times, show that the disputes could undo key global environmental protections.
The environmental chapter of the trade deal has been among the most highly disputed elements of negotiations in the pact. Participants in the talks, which have dragged on for three years, had hoped to complete the deal by the end of 2013. (...)

That together with the growing opposition in the US to Fast Track authority, which would make it impossible for US Congress to make any demands or changes once the negotiators from the 12 countries have agreed on the TPP, makes the debate even more worthwhile right now.

On Sunday, Amy Goodman will talk in Kyoto, and on Monday at the Foreign Correspondents Club in Tokyo.

Interview with Colin Crouch, author of such books as Post Democracy and The Strange Non-Death of Neo-Liberalism here.
Consumer rights politics TPP whistle-blower