January 27, 2014
My take on the recent WikiLeaks release of details about TPP is up on Japan Focus: 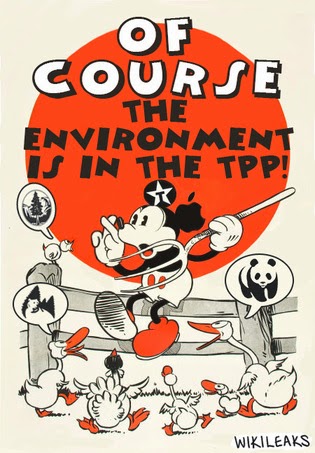 WikiLeaks and the Release of the Environment Report

WikiLeaks has done it again – made available important documents that governments and corporate interests have tried to keep secret from the general public. Until this new release, we had almost no idea what was going on within the secret Trans Pacific Partnership (TPP) negotiations involving an extraordinarily diverse group of 12 large and small as well as rich and poor nations of East and Southeast Asia, Australasia, and North and South America. The twelve are Australia, Brunei, Canada, Chile, Japan, Malaysia, Mexico New Zealand, Peru, Singapore, the United State and Vietnam, with the US driving the agenda. South Korea and Taiwan have also indicated that they may want to join. This time, we get a glimpse of the status of the Environment Chapter with important implications for the people and nature of the region. In this cartoon accompanying the release, WikiLeaks shows Mickey Mouse crossing his fingers while promising that “Of course, the environment is in the TPP!” Note the corporate logos symbolizing Texaco and Apple, while the (usually copyrighted) Disney character is singing his merry tune to the crowd of birds and geese (or are they ducks?) representing environmental organization. Crossing fingers can mean wishing for luck but, of course, it also signifies breaking a promise. How appropriate. - Read it at: WikiLeaks and the Release of the Environment Report

TenThousandThings said…
Many thanks for this summary and analysis!
3:13 pm, February 04, 2014