Farmers Markets 2014 And Much More 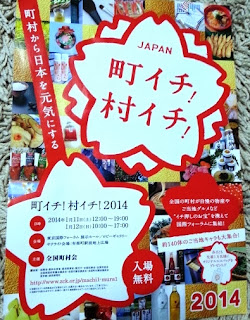 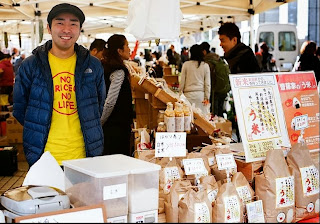 So much going on here with all kinds of farmers markets and marche events and promotions for islands and local fairs...

Atenna shops too a great way to make your local foods known in the big cities. Add to that parties and invitation-only deals. I like it a lot.

My Kodansha 2009 book was all about making it obvious that Japan has to celebrate its culinary roots. Be that seasonal - in January I love the decopon citrus, as well as other green veggies and fruits and berries that we can only enjoy around this cold season.

I think we will see more and more of independent markets, in 2014. 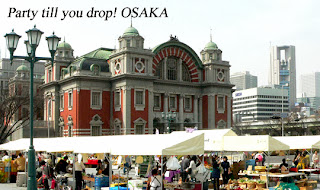 It is happening in Osaka, too. And in Beijing!!

The Beijing Farmers’ Market began life as a foreign-inspired fad run by a small group of expatriate artists but, three years on, it has become one of Beijing’s premier foodie paradises, where dozens of farmers, cheese makers and other self-professed “artisans” enjoy a thriving trade every weekend.

I hope more and more blogs will promote great stuff.

Joan - who blogs about farmers markets - just helped make this happen over at Kickstarter:


A short documentary about how urban farming is changing the way Tokyo thinks about food.

Why are you doing it?

Two of the biggest problems facing agriculture these days are that it is too big and too far removed from people's lives. We have lost touch with what it means to feed ourselves; having chosen convenience over sustainability. But there isn't really anyone to blame for this other than our own human willingness to believe that something so easy can also be good for everyone. Watermelons and pineapples year-round is certainly nice, but there are ramifications for that which we are only just becoming aware of. The agricultural landscape is no longer the small family farms and quaint communities that have been ingrained into its cultural image; it's hundreds of acres of wheat and soy covered with pesticides and artificial growth hormone. My generation has been raised to believe that food comes from the grocery store.
The issue is what do we do about it? Have everyone move out of the city and back to the family farm that their grandparents or great-grandparents had? That's never going to happen. We live in a world governed by big metropolises, and who could fault anyone for not wanting to leave the cities where they were raised and love living? What urban farming has the ability to do is reconnect people with their food without taking them out of their environment. Small scale as many of the projects may be, the potential to raise awareness about agriculture and provide a truly sustainable food source is enormous.
I chose to embark on this project because I am one of the people who want it both ways. I grew up in a populous area with no agricultural experience, and it is only when I left for college that I began to get involved in growing food. I know that I want to do that for the rest of my life, but what I don't know is where. As one would expect, agriculture has its own special set of issues in Japan, especially since the Fukushima disaster, and as such urban farming has its own unique set of opportunities. Food is not a national issue, it's a global issue, but if problem solving can begin here in Tokyo, it will spread. I am doing this because I believe in the future of food, and I want to do something that I think will help.


What's the money for?

A great deal of the money will go towards transportation because in order to make a film about Tokyo, I want to see lots of Tokyo. The subways and trains here - like everything else - are expensive, so that adds up quick. The biggest chunk after that will be for equipment; I have the bare necessities but there are some small but expensive pieces that would go a long way towards making this thing the best it can be - specifically: a variable nd filter, a zacuto viewfinder, and a new lens.
The rest is sort of miscellaneous expenses: getting enough online storage space to work with Sam from across the Pacific, getting enough physical storage to have everything backed up etc.

This one is the most important, thank you so so much for your time (money) and money. This work is so important to me and I can't tell how much I appreciate any support you can give.