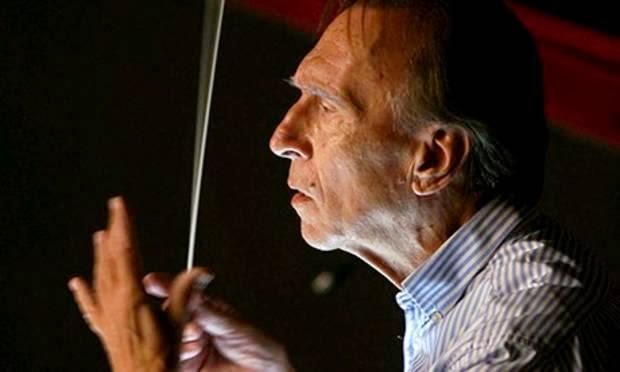 Okinawa does it again: Mayor Susume wins in Nago, opposes US base construction

I have to agree with Ten Thousand Things, this is a moment for all to consider, like when Martin Luther King spoke of a "moral arch of justice" back in the 1960s in the US.

Sakurai's re-election victory over his two rivals with close ties to the ruling Liberal Democratic Party (LDP) is certain to put pressure on the government of Prime Minister Shinzo Abe to change its policy to restart idled nuclear reactors in Japan. Nuclear power is also expected to become a focal point of the Feb. 9 Tokyo gubernatorial election.
Whether to end nuclear power generation and whether idled nuclear reactors should be reactivated or not are also likely to become hot issues in a growing number of elections, even among municipalities that don't host nuclear power plants.
When initial reports about Sakurai's probable win reached his office in the city's Haramachi district, a beaming Sakurai said the electoral result represented the voters' sound judgment. ''I am aspiring to realize a nuclear-free society and build a Minamisoma that we can boast about to the world,'' he said, drawing big applause and cheers from about 200 supporters.
After the 2011 Great East Japan Earthquake and tsunami triggered the nuclear crisis at the Fukushima No. 1 Nuclear Power Plant, Sakurai turned to the Internet to tell his city's plight to the world and was listed on TIME magazine's 100 most influential people that year.
Sakurai also serves as a facilitator for a council of municipal leaders, including former and current governors, mayors and village chiefs, who have been trying to get rid of nuclear power in Japan. He also played a major role in forcing Tohoku Electric Power Co. in 2013 to cancel the Namie-Odaka nuclear power plant project that was to saddle the town of Namie and Minamisoma's Odaka district. During the mayoral election campaign, he also called for expanding the anti-nuclear council of municipal leaders, challenging his two rivals who expressed their support for restarting nuclear reactors in other prefectures.
In Fukushima Prefecture, six incumbent mayors and village chiefs have failed in their re-election bids in the current fiscal year due to protracted reconstruction efforts. Sakurai won re-election partly because his two rivals failed to unite and settle on a single candidacy. During the election campaign, Sakurai tried to dodge criticism over slow restoration work, saying the number of residents in Minamisoma has risen to 52,000 from less than 10,000 at one point due to mass evacuations.
Sakurai's victory has buoyed the spirits of members of the anti-nuclear council of municipal leaders. Former Tokaimura village chief Tatsuya Murakami in Ibaraki Prefecture said Sakurai's re-election victory would make it difficult for the Abe government to restart nuclear reactors without any debate. He also said the victory would strengthen the hands of the anti-nuclear force in the Tokyo gubernatorial election and proposed fielding a unified anti-nuclear candidate.
Kosai Mayor Hajime Mikami in Shizuoka Prefecture said voters have the final say in the nation's energy policy. He said the anti-nuclear movement should also be a focal point in municipalities that do not host nuclear facilities. 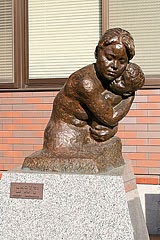 Time - perhaps - to reconsider our views on the civilian suffering during WW2 in East Asia. It wasn't just atomic bombs. Where is the outrage, concern, compassion at all the other air raids? Having said that, there are numerous smaller monuments all over cities like Tokyo to the victims, including in Shinjuku. Image of mother and child by Shin Kohno, at the Center of the Tokyo Raids and War Damage.

And of course the conventional aerial bombing campaigns also affected people in China, Korea, The Philippines... And then in Vietnam, and Laos. How fortunate we have been in this part of the world, recently, to avoid such carnage, for such a relatively long time... Namu Amida Butsu...

We are all on the "ring of fire" and here's to hoping we are all safe. 19 years since the Kobe earthquake, this month. Asahi Shinbun:


KOBE--Early on a cold winter morning, mourners packed a park here on Jan. 17 to remember the exact moment when the Great Hanshin Earthquake struck 19 years ago, devastating the city and killing 6,434 people.
Local residents, survivors of the earthquake and others offered a silent prayer at 5:46 a.m. on the 19th anniversary of the disaster at Higashi Yuenchi park.
Starting from 5 a.m., the park hosted a memorial ceremony in which about 10,000 bamboo lanterns lit from a memorial gas lamp at the park named “Light of Hope” were laid in the form of "1.17."
Flames from the lamp were used to light other lamps and lanterns at early-morning memorial gatherings at five sites in the prefectures of Iwate, Miyagi and Fukushima, which were hit hard by the March 2011 Great East Japan Earthquake and tsunami.
The aging survivors of the Great Hanshin Earthquake have voiced a growing concern over the fading memory of the disaster, while the reconstruction of the city has continued.

Claudio Abbado has passed away. A great classical conductor. He was 80. That means he was just around my age now when I had the pleasure and the wonderful opportunity to sing in the Malmö Symphony Chorus that he visited to conduct when I was in High School... We performed Brahms, a special tune called the "Song of Destiny" with a full orchestra. What a lesson that was. How fortunate I and my friends were, and how nervous we were, and glad when it was all over. There is even a Swedish Radio broadcast of the entire thing. We were that good. RIP.

Here is a version with Zubin Mehta conducting...

Ἀντισθένης said…
Kobe put the final nail in the coffin of respect for Japanese authority and competence, and the Japanese public psychological independance. I was in Kanto then on JET and was livid at the wasted lives: Japanese construction, kerosene heaters, governor's delay in asking for help, quarantining foreign search dogs... You save lives in the first couple of hours, excepting the rare miracles.
9:29 am, January 21, 2014

Martin J Frid said…
Thanks for that, Kobe must have been seriously bad, I had no idea. You have seen a lot.

Tom O said…
Air raids - how 'charming' that in a city where virtually all the houses/buildings were wooden the Americans dropped literally tons of incendiary bombs on Tokyo in March 1945 which of course then resulted in firestorms. Btw, here in London in later 1940 the German Luftwaffer carried out bombing operations on 77 consecutive nights. Ok, all is fair in love and war and all that but, jeesh...

New Zealand. There was the big quake that hit Christchurch almost three years ago. There have been many many aftershocks henceforth and the famous cathedral - scene of fatalities - had to be destroyed. Liquefaction/silt factors still affect the place - which was a base of mine for three months back in 1994. Such sh*t really shouldn't happen in such a great place full of great people but, asi es la vida. Ne. The Ring of Fire.
12:37 am, January 23, 2014

Tom O said…
1. Gomen/disculpa me for the couple of typos!