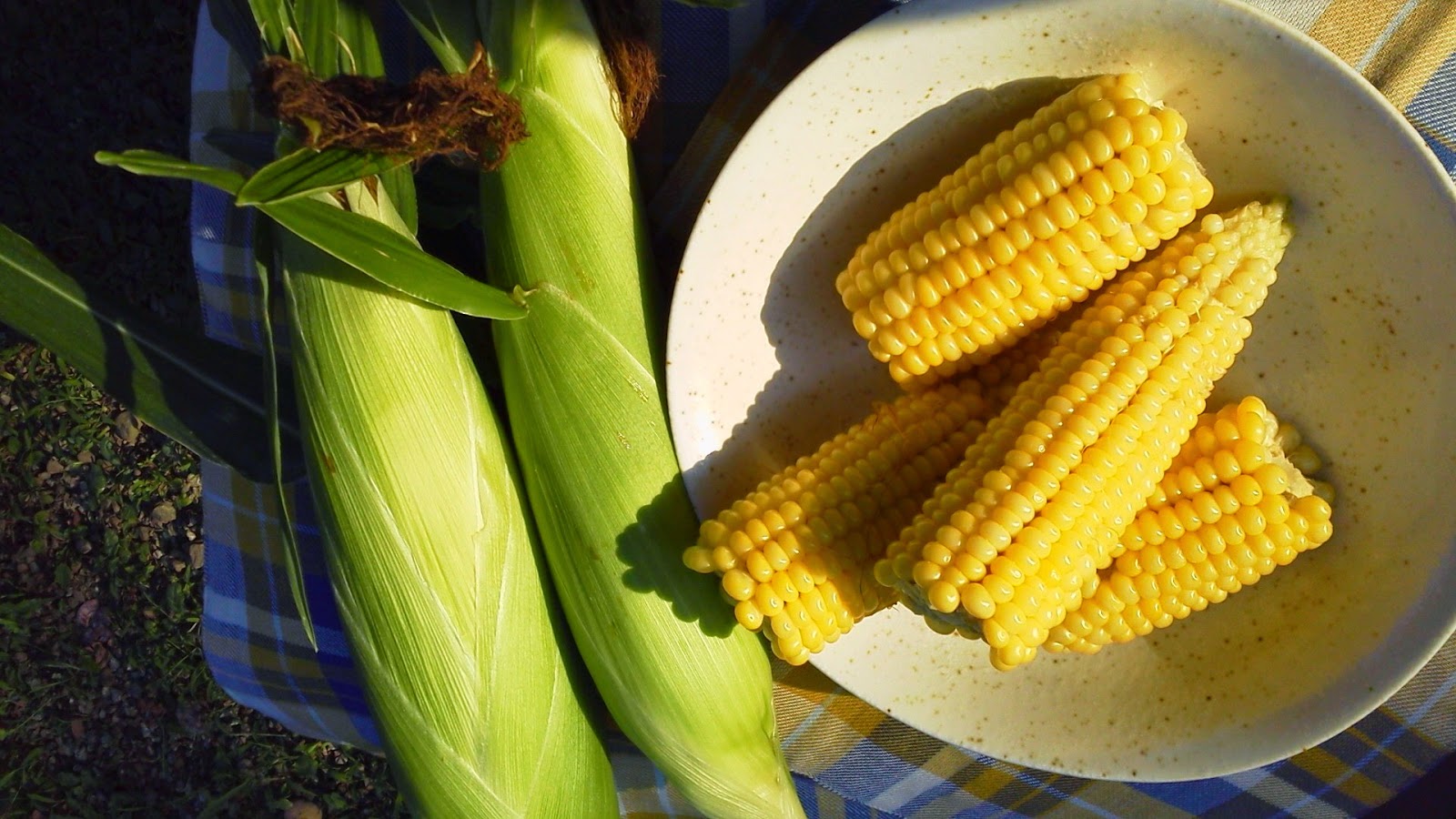 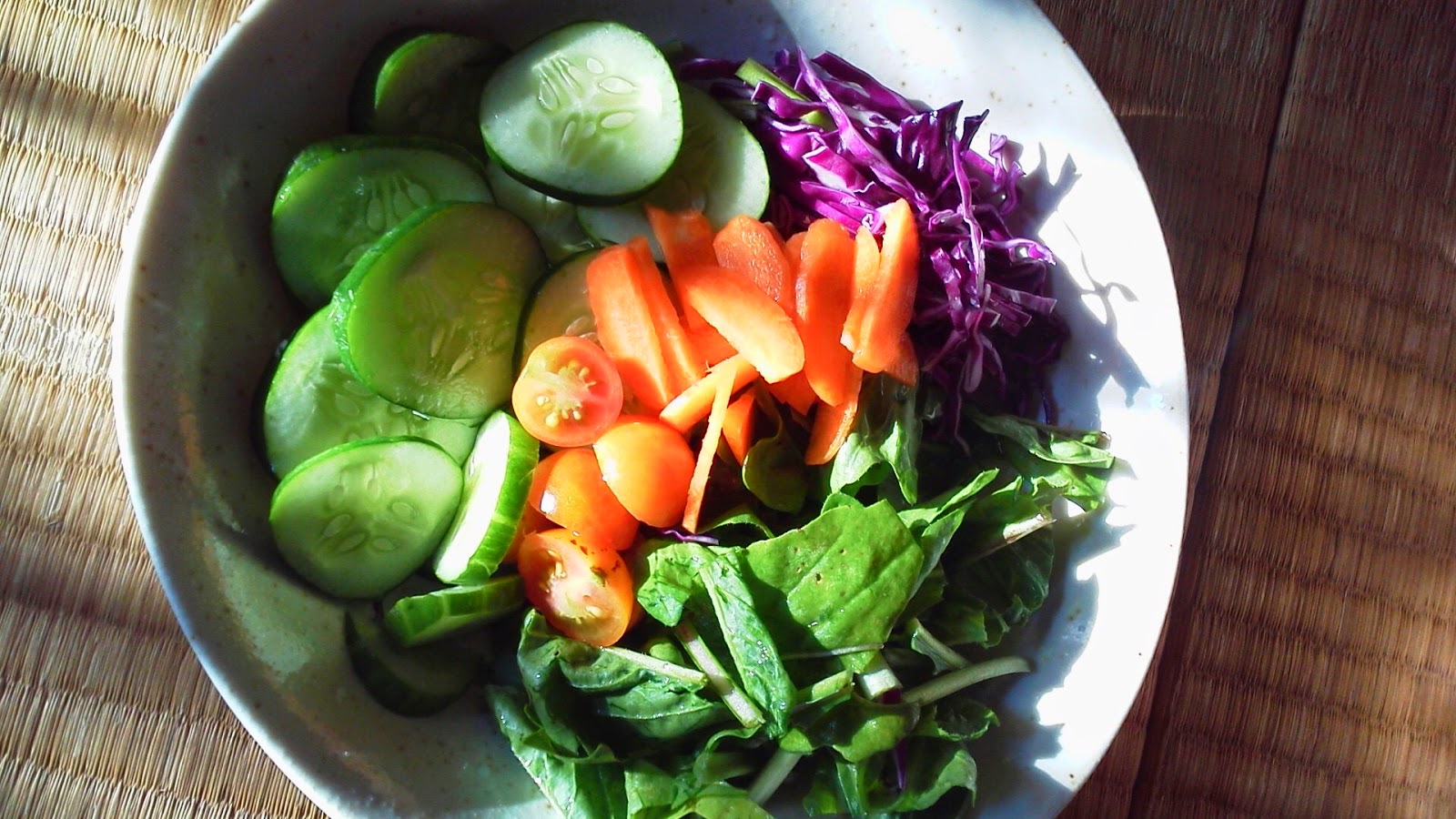 Some of my veggies did good this summer, in spite of the insane heat due to the typhoons in early August.

Now, things are back to normal, somehow.

Climate change indeed, I don't remember typhoons in August when I first arrived on these shores.

Warm, yes, but not so hot and humid.

My corn was alright, very sweet and lovely after a 10 minute boil. No salt needed.

But I did really well with the purple cabbage/cucumber/carrots while lucking out in the ruccula department - they just self-seeded since last year. Bitter, tasty, my new favourite greens.

With a drop of vinegar, if you must :)

Even if you just have a balcony, do try to grow something. You will learn the basics, know when to water, and look forward to the harvest. Write a poem, enjoy the change of seasons.

I'm sad to see new houses being built with ample parking space for cars, and no garden. Bad. We need to quit the asphalt and go for the soil and compost. Learn to live with your own veggies.

Even a tiny space means a lot.

FAO: The future of Family Farming: empowerment and equal rights for women and youth

To cultivate the next generation of family farmers, we must invest in women and youth.
The stereotype of the young male farmer has given way to the reality of an aging, female-fronted farming force. In the developing world, women make up 43 percent of the agricultural labor—and, in some countries, they make up 80 percent of agricultural labor.

JA Youth is all over Japan trying to engage young people to like farming.

All kinds of events and promotions to educate people how to get started. (J)

Lots and lots of blogs about starting farming.

Here is from Fukuoka in Kyushu....

Or even in west Tokyo, in Kokubunji...

Japan's Ministry for Farming, MAFF, has a special page for "new farmer" - do explore.

They are serious about it, folks.

And then there is manga and anime to get young people to like farming? I'm all for it.


“Silver Spoon” centers on a pack of individualistic youngsters who attend a vocational high school for dairy farming in Hokkaido, northern Japan. Not your average youth film about sports, first love or superheroes, this pleasant pic offers an uncommon glimpse into modern agricultural practices while teaching respect for the food chain. Adapted from the bestselling manga by Hiromu Arakawa, it is smoothly if unadventurously helmed by Keisuke Yoshida and brightened by a likable teen cast. It’s ideal material for educational screening events and could target tween auds in Asian markets.
Arakawa (who also penned the huge hit “Fullmetal Alchemist”), actually has farming roots and attended an agricultural school in Hokkaido on which the setting of “Silver Spoon” is based. Her experience lends authenticity to the fiction, underscoring the rugged pride of country folk as well as the economic difficulties they constantly face. Yoshida’s adaptation plays it safe with the original’s storyline and spirit, delivering solid, feel-good drama, but it could have done with a dollop of the quirky humor he injected into his “Cafe Isobe” (2008).
Like the manga (and the TV anime spinoff), the yarn is told from the perspective of city boy Yugo Hachiken (Kento Nakajima), who enrolls in Ooezou (aka Yezo) Agricultural School in Hokkaido’s Tokachi, a major dairy-producing region. Initially, drama arises from the clashing attitudes of Hachiken, who picked this far-flung school just to avoid his parents, and his classmates, who chose this vocation in order to inherit their family farms. The film also milks some droll humor from the school’s curriculum (which involves waking up at 4 a.m., jogging around the 20-kilometer campus, getting up close and personal with the cows and collecting horse dung), which the hardy country kids take for granted, but which feels like boot camp for wimpy Hachiken. His internship at the farm of classmate Aki Mikage (Alice Hirose) reveals the back-breaking work as well as the impressive modern technology that go into running such an operation.
However, the story’s core values are expressed in Hachiken’s deepening attachment to a baby pig he names Buta-don (“pork rice bowl”). Although his classmate Ichiro Komaba (Tomohiro Ichikawa) jeers at his hypocritical sentimentality over an “animal of economy,” Hachiken struggles to accept that the pig is destined for slaughter; how he eventually deals with this not only signifies a bittersweet coming-of-age, but also advocates a posture of humility toward the ecosystem.
Anime farming Food Hokkaido