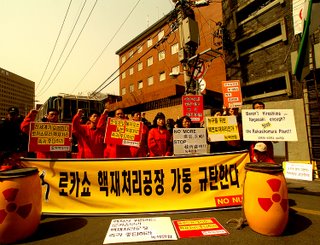 Peace groups and environmental groups including Korean Federation for Environmental Movement organized a protest against operation of the Rokkasho Reprocessing Plant on March 31, 2006 in front of the Japanese Embassy in Seoul. KFEM has an excellent English website here.

Korean NGOs expressed their concern that the reprocessing of spent fuel might result in Japanese nuclear armament which will bring about tension and conflict in Northeast Asia. They also said large scale contamination from the facility is another big environmental threat.

Japan's Citizens' Nuclear Information Center has more details about the concerns about Rokkasho here. Have a look at their English website here.

Update: Water containing radioactive material has leaked at the Rokkasho nuclear fuel reprocessing plant in northern Japan, but no radioactivity was released into the atmosphere, according to The Mainichi:

About 40 liters (10.5 gallons) of water containing plutonium and other radioactive material leaked inside a compound at the plant in Rokkasho on Tuesday, said Yukio Takahashi, spokesman for Japan Nuclear Fuel Ltd.

One would think they would be a little more careful with a substance that is so lethal to humans.

Update: BBC also had the story about the Rokkasho accident, and they note that: "Nuclear installations, which supply much of Japan's power, have come under the spotlight in recent years after a string of accidents and mishaps." I'm happy to see that the BBC lists the Citizens' Nuclear Information Center under "Related Internet Links". Congratulations!