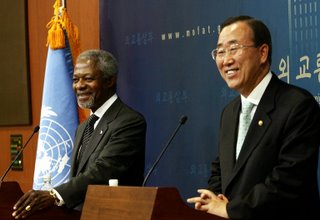 "I think in terms of priority, the nuclear crisis is by far the most important and should be given separate and top priority compared to human rights and other activities," he said in a joint press conference with South Korean Foreign Minister Ban Ki-moon after their meeting in Seoul.

NHK noted that Kofi Annan urged Japan and South Korea to continue their dialogue to mend bilateral ties, which have become strained over a territorial issue involving some small islands in the Japan Sea and Prime Minister Junichiro Koizumi's visits to a war-related shrine in Tokyo.

Turning to historical differences that are pitting Japan against the regional victims of its past aggression, Annan recommended Europe as a model for resolution of conflicts. He said Europe had a similar experience but was now moving to a union of 25 countries. The 60th anniversary of the end of World War II, he recalled, saw heads of state from Germany, France and the U.S. stand together with Japanese Prime Minister Koizumi and President Roh Moo-hyun. He expressed hope that one day he could attend a similar ceremony in Asia.

(South Korean newspapers should know that Europe is not "moving towards a union" but has already achieved this - after the breakup of the Soviet Union - while East Asia indeed still remains ideologically divided. The communist regimes in China and North Korea possess nuclear weapons, not Japan or any other country in the region.)