June 26, 2006
Pop Quiz: Which shrine visit this month will not harm Japan's relations with China and Korea? Answer: See below!

Source: British newspaper The Times Online in an article that includes a good analysis of Koizumi's term as Japan's Prime Minister:

US relations: Japan has never been closer to, or more trusted by, the country that it relies on for its defence

US troops go home: After long negotiations, 8,000 US Marines are to be removed from the island of Okinawa

Charisma: He is the first Japanese prime minister whose name people can remember

Neighbours: No postwar prime minister has been more hated or shunned by China and South Korea over the Yasukuni Shrine visits

UN: Attempts to gain a permanent seat on the Security Council have been rebuffed by the US

North Korea: Japan’s insistence on the return of its abducted citizens has prevented the normalisation of diplomatic relations

Stubbornness: Mistrust caused by shrine visits will take a long time to overcome 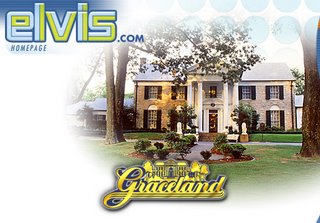 (Great photoshop view of the Graceland "shrine" from Elvis.com - actually the rock star's house looks more like the photo below!)