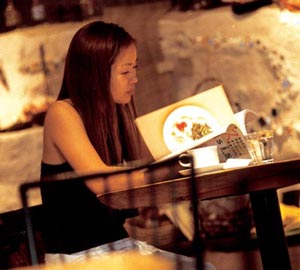 I enjoyed this article in Metropolis Tokyo about Japan's Slow Life Movement.

After spending just a few minutes with Yurika Watanabe, it’s obvious that she’s comfortable living life at her own speed. Soft-spoken, intelligent and direct, the 29-year-old manager of a Slow Food restaurant in Kokubunji projects the easy confidence of someone who operates according to the dictates of conscience, not the demands of a watch. “I’m interested in organic food and fair trade because they have a strong connection with people, which I find attractive,” she says.

It is not just a trend among a few people, but has also been adopted by several cities and even one prefecture:

In 2001, Iwate Prefecture in rural northern Honshu adopted the slogan of "Ganbaranai!" — a sly refutation of the common Japanese "Ganbare!" exhortation to work harder. In doing so, the prefecture turned its back on the rampant development that characterized the ’80s and ’90s, and with it the tendency to judge projects (and people) by whether they were ahead or behind schedule. Similarly, Kakegawa City in Shizuoka Prefecture declared itself a "Slow Life City" in December 2002, joining more than 60 such metropolises around the world, a number that promises to grow.