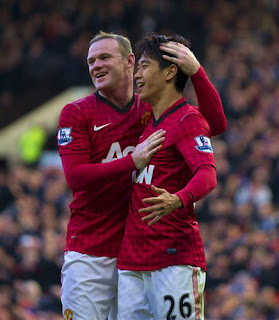 Congratulations to Shinji Kagawa, 23, who scored a hat-trick for Manchester United!

"I think I'll get a lot of attention because I scored a hat-trick but the fans in Japan are looking toward the Real Madrid game and that's where I'm setting my sights," Kagawa said, after netting in the 46th, 76th and 87th minutes before a turnout of 75,586 at Old Trafford.
"It'll be a terrific atmosphere here. I'll put the team first as always and prepare as well as I can for the match."

Kagawa scored three goals ("hat trick" in football parlance) in United's 4-0 home win over Norwich City. Kagawa is the first Japanese to score a hat trick on English soil since Junichi Inamoto, who fired Fulham into their first UEFA Cup in 2002 with a triple at Craven Cottage, according to The Mainichi...

Terrific photo, what a joy for the fans: AP Photo/Jon Super/The Mainichi

Tom O said…
Very happy for this guy, he was pulling up trees at Dortmund and is obv now doing the same at Man Utd. Seems a a nice guy too! Alas, Arsenal lost at our rivals Tottenham over the weekend. For the first time in, what, 18 years we are not going to be top 4. Did I mention I once saw Tottenham lose 4-0 to Japan in Tokyo back in 1991? Happy days!
8:23 pm, March 06, 2013

Tom O said…
Does please me verily to see so many of Japan's 'Seleccion' players doing so well in Europe. Even the likes of Yoshida at Southamption. The highlight for me is Nagatomo at Inter.
8:25 pm, March 06, 2013