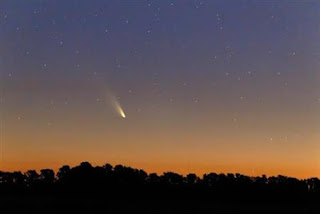 Nice video animation by the good people over at NAOJ (E) of the path of the comet that we will possibly be able to see, in the western sky, just after sunset. I think this is using Mitaka, a cool space visualization program that was developed by Kato Tsunehiko. Stars within 3000 light years with distance measurements from the Hipparcos satellite are in the database... 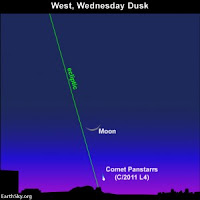 Tricky to catch since it is so close to the horizon. Earthsky provides this helpful image.

And did you know that you should be able to see at least five planets this month?

You’ll have absolutely no trouble spotting the dazzling planet Jupiter this month, which pops out high into the sky at evening dusk. The king planet ranks as the fourth-brightest celestial body to light up the heavens, after sun, moon and the planet Venus. However, Venus will be obscured in the glare of sun all this month. Look for the moon to pass close to Jupiter on March 16, 17 and 18.

This particular comet is called Pan-STARRS, because the Panoramic Survey Telescope And Rapid Response System was the first to detect it.