No Nukes 2013 Events In Tokyo This Weekend 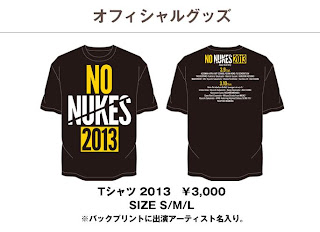 Monday next week of course a very solemn date for all of us here in Japan, as it marks two years since the massive earthquake and tsunami that hit Tohoku, northeast of Tokyo. Polls in the news this week indicate that a lot of people are still suffering and in doubt how to carry on.

The Tohoku region, and Fukushima prefecture, has such a long history. It is not easy to abandon one's roots and one's hometown. However, many people in this part of Japan were migrants in earlier eras, going to the US and Hawaii. Fukushima also has that special kind of vibe, with people from Manchuria returning after WW2, to battle against the forces of nature again. No wonder there are a lot of people in Tokyo who want to support and help any effort from Tohoku, like the Nippori March events.

You a;so get the inspiration from ladies like the Hula Girls movie, based on a true story.


Plus the fierce fishermen and everyone involved in the trade along the coast. I was particularly struck by the train lines, when I visited Tohoku, such narrow gauge lines, through old tunnels and on overpasses that were clearly not strong enough. That broken coastal line that I saw two years ago in Minamisanriku in Miyagi prefecture was beyond repair, but you cannot say that to the people who used it day-to-day. 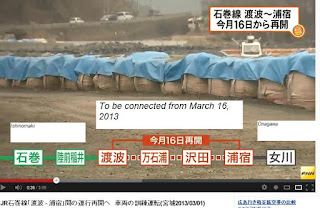 Day by day, roads and train lines have been brought back to service in this part of Japan.

Media here has noted it but I'm not sure how much of that caught the attention abroad.

Here is a FNN local clip about a train service that is finally coming back in service after two years.


It wasn't just the massive tsunami, though. It was the Fukushima nuclear power plant, that still is not really under control, is it. As I type, I note that I don't have my usual genki Kurashi verbs and adjectives ready. Seems this is something that will be with us for 30 or 40 years. Or more. Kyoto Journal once had an article that suggested that the Fukui prefecture Zen temples may have the kind of lesson to help us through the nuclear age. Most people seem to just ignore such state of affairs.

I do wonder about this weekend. Big demonstrations and parades planned again. A year ago, some 40,000 or 60,000 or 100,000 people gathered in Tokyo to protest against nuclear power and everything that was wrong with the world. Nice photos of that event here and here and here.

Meanwhile, we have also had to deal with North Korea testing its nukes.

American expats who are bloggers in South Korea are more concerned:

UPDATE: A North Korean foreign ministry spokesperson just warned that North Korea would exercise its right to launch nuclear preemptive strikes on the “invaders strongholds.” as long as the United States is pushing to ignite a nuclear war against the North. Or something to that effect.
ORIGINAL POST: OK, North Korea’s Rodong Shinmun is warning it can turn not only Seoul, but also Washington DC into seas of fire.


- North Korea’s throwing its poo around again, this time threatening to nullify the Armistice Agreement. OK, now I’ve heard North Korea threaten to void the Armistice so many times I can’t really take it seriously, but I did find the “diversified precision nuclear strike means of Korean style” bit mildly amusing:

North Korea has also vowed to take unspecified retaliatory steps if the Security Council imposed more sanctions against the country for its third nuclear test on Feb. 12, and its latest warning amplified on such threats.
“Now that the U.S. imperialists seek to attack the DPRK with nuclear weapons, it will counter them with diversified precision nuclear strike means of Korean style,” the North Korean statement said, using the acronym of the North’s official name, the Democratic People’s Republic of Korea. “The army and people of the DPRK have everything including lighter and smaller nukes unlike what they had in the past.”