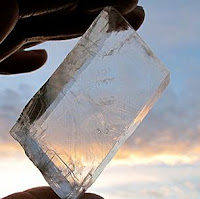 We know precious little about how our ancestors travelled. We do know that the Vikings used some kind of "Sunstone" to sail, and recent discoveries seem to confirm that they may have used a kind of crystal found in Iceland and other places in Scandinavia, called spar or Iceland spar or silfurberg. Fältspar is a common Swedish word, so this is not an unusual stone, and not a precious stone as such, but they simply may give a hint at where the sun may be on a cloudy day through polarization.

We know of course that vikings like Leif Eriksson settled on the eastern coast of North America (called Vinland by the Scandinavians) long before that upstart Columbus reached what we now call the "American" continent, but it hasn't been clear how the vikings navigated, except for the few lines in ancient Nordic texts.

Viking legends, including an Icelandic saga ‘Rauðúlfs þáttr’ with  the hero Sigurður , hint that these sailors had another navigational aid at their disposal: a sólarsteinn, or sunstone.
The saga describes how, during cloudy, snowy weather, King Olaf consulted Sigurður on the location of the Sun.  To check Sigurður‘s answer, Olaf  “made them fetch the solar stone and held it up and saw where light radiated from the stone and thus directly verified Sigurður’ s prediction”.  In 1967, Thorkild Ramskou, a Danish archaeologist, suggested that this stone could have been a polarizing crystal such as Icelandic spar, a transparent form of calcite, which is common in Scandinavia.

Now it seems just such a crystal may have been found near an English shipwreck. The English vessel sank in 1592, some four years after the Spanish Armada, near Alderney.

The Independent: Not just the stuff of legend: Famed Viking 'sunstone' did exist, believe scientists

Researchers who have spent three years poring over a cloudy crystal discovered in the wreck of an  Elizabethan ship sunk off the Channel Islands believe they have proved that it could be the substance described by the Norsemen as helping to locate the sun when obscured by cloud. The so-called sunstone has long been the subject of scientific intrigue after it was described in one Icelandic saga as a magical gem which, when held up to sky, would reveal the position of the sun even before dawn or after sunset.

Such a navigational aid could be one of the secrets behind the Vikings’ reputation as remarkable seafarers whose prowess at heading into unexplored water means they may have beaten Christopher Columbus as the first European visitors to America by hundreds of years.

So, why not? There would have to have been someone on a Viking ship who knew about navigation. Using the sun and stars, well what do you do when it is cloudy and rainy and storms are all around you? If a simple device like a crystal can do the trick, then I'm pretty sure they used it. Plus, they probably kept it secret, just like today with all our convoluted patent laws and intellectual property right protection issues and WTO and TRIPS and TPP debates --- but I'm digressing. Isn't it wonderful to imagine that on each viking ship, a very smart guy with a precious crystal was on board, to make sure everyone got from A to B to C?

If you ever get the chance, do visit the amazing Oslo museum, with the 24 meter long Gokstad longship. I had the pleasure of going on a junior high school trip (I always had great teachers!) to this place, and it is really something, especially if you like sailing.

However, what does seem to be pure fiction, is the work by English author Gavin Menzies, who wrote the curious book 1421: The Year China Discovered the World. There seems to be an unusual agreement among all historians and others that this book is complete nonsense. See for example 1421 Exposed and here and here.

Tom O said…
As you may know I visited this museum/saw the ship in the August of 1989 on my way to Moscow, still have the museum guide somewhere. It verily used to p*ss a certain Norwegian that I used to know that I had done this. Not only that I been to the museum/Oslo but where I was on my way to after...

Everyone from the UK goes to Oslo, right??

Back in 1999 or thereabouts I spent the weekend there, staying with 'chum's' brother, we went to see Valerenga at the Ullevaal Stadium and then went to the amazing bar after. Bar's name to follow!!
2:32 am, March 07, 2013