Here is a door to the universe.

Star Party for the public is held at the Mitaka Campus of the National Astronomical Observatory of Japan, on Friday before the 2nd Saturday and the 4th Saturday in every month.


Even city lights have taken dark nights away, the universe is still above us. Now it's time to explore the vast universe.

A telescope enables us to observe a fine pattern and faint stars thanks to its large aperture. As you know, main roles of telescopes are to collect light and to magnify distant objects.
As for concentration of light, larger mirrors or lenses telescope have, more light they can collect. A human pupils has a diameter of about 7mm, while our telescope has a main mirror 50 cm in diameter. The power of collecting light for our telescope is about 5000 times larger than your eyes.
As for magnification, the lowest and the highest are determined by the aperture. It is not reasonable to raise the power recklessly. The maximum magnification equals to the numerical value of the aperture at the unit of the millimeter as a rough guide. The minimum magnification equales the aperture (mm) divided by 7 mm (the diameter of the human pupils). Thus, in case of the 50 cm aperture, the maximum magnification is 500 times, and the minimum magnification becomes 71 times.


I like how the NAOJ Mitaka campus east of Tokyo is open to the public. Their website will need a little help, but hey, nobody is perfect. These guys and gals are too buy watching the sky to pay attention to stuff like websites. Don't we all know that feeling.

The facilities marked (*) are designated as tangible cultural properties. 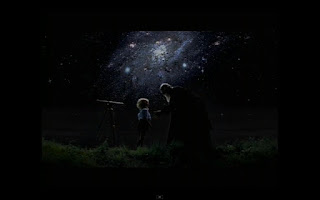 "O telescope, instrument of knowledge, more precious than any sceptre." - Johannes Kepler in a letter to Galileo (1610)