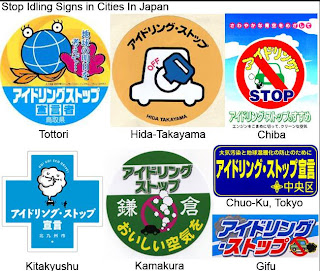 Strange. Toyota and Honda and Mazda have introduced Start-stop systems that mean car engines are simply turned off when the car isn't moving. So why are there no campaigns to help every driver understand that turning off the engine manually, will also reduce gasoline use, and save money? Not only that, but reduce exhaust pollution and help combat climate change.

Japanese car companies have been loss-leaders in this field, fighting a lot of battles since the 1970s. I guess the car business is just that kind of game. You can't win, they are destroying our towns and cities and no matter what kind of sense or reason, the car is the rule.

Getting back to idling, why did not the Japanese ideas back in the 1970s to save gasoline catch on?

Interesting to note that the writer was aware of "CO" emissions back in 1974, and the need to keep them as low as possible.

The car industry, however, is less interested in such stuff. Over 30,000 deaths each year in the US, and how many injured and handicapped for life, each year? Is there any other such force that makes a profit from killing a lot of people?

Half of all road traffic deaths are among pedestrians, cyclists and motorcyclists, and young adults aged between 15 and 44 years account for 59% of deaths. 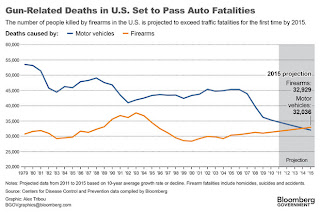 Do take a look at that graph. Gun deaths is something the US is infamous for. Much worse, really, is the case if you compare to auto fatalities. Look at 30 years ago, the US had some 40,000-50,000 people dead in car related accidents. Now it is down to 30,000-35,000. Annually, still worse than gun-related deaths.

It is easier to compare if we break it down to deaths per capita:

In Tokyo, and many other parts of Japan, it’s illegal to leave your motor running when parked, and the law applies not only to taxis but also to trucks, buses and regular passenger cars. The idea is to protect the environment by reducing carbon-dioxide emissions, but as you pointed out, idling also wastes energy and creates heat and noise — the last thing we urban dwellers need, especially in these hot summer months.

How can we get the rules to stick?
Climate change peak oil reduce

Tom O said…
Is there any other such force that makes a profit from killing a lot of people?"

Yes indeed, its called the 'Arms Industry'. Very profitable business here in the UK, selling fighter jets and the like to Saudi Arabia and pray, I wonder where the Syrian army got all their mayhem and destruction killing hardware? Ah, that would most likely be Russia and/or China. Its the whole 'ironic' shenanigans of the US selling weapons to Iraq and Iran (the name 'Rumsfelt' comes to mind and of course Cheney and his big links with Halliburton/Lockheed-Marin). Just WHERE do all those despotic regimes actually get their killing stuff from?? Take your pick... Reminds of of the Falklands War where the Exocet missiles that the Argentinians were using to sink Brit ships were bought from...France. So, if I may, I'll second the motion of the ARMS INDUSTRY.
3:16 am, March 27, 2013

Pandabonium said…
I would love to live in a place where personal automobiles were not extant. In addition to the environmental costs, I have seen and known too many people killed or maimed by cars. One of the worst inventions in history - along with the gun.

Martin J Frid said…
Thanks for the comments, guys. The food industry is another contender for First Prize...

Pandabonium said…
Adding to Tom's comments - the ongoing death and injury to innocent people thanks to land mines...

Yes, Martin, thanks for bringing this up... the food industry (meat in particular) is behind many of the leading causes of death in developed countries, except for one, which is death by medicine.

Tom O said…
I was seconding the emotion of the original proposition about the indiscriminatory killing of people. (Boy, THAT took a lot out typing it!). BUT, I did laugh - out loud - about 'you cannot second your own emotion'. You know what, Martin? With that kind of wit you should try writing lyrics...
9:02 pm, March 28, 2013

Tom O said…
I DO need to go sleep at night - thus if I start thinking about land mines and the maiming that still goes on... They reckon that even in the Balkans there are over a million of these charming contraptions about, ready for some unsuspecting person to wander along. There is also somewhere else, of course could be anywhere, where the 'side' laying the mines mislaid/lost their map of where and when. Human behaviour - as always always a fan..
3:05 am, March 29, 2013

Pandabonium said…
Diana Ross & The Supremes with The Temptations -

"I Second That Emotion"