Anti-Nuclear Protests In Tokyo - In 1957 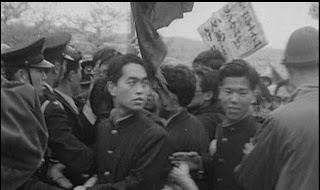 I stumbled upon some interesting video footage of a large anti-nuclear protest outside the UK Embassy in Tokyo, held in 1957. While I knew about the early actions by groups of survivors of the Hiroshima and Nagasaki bombings, and their supporters, this was news to me. In light of the massive anti-nuclear demonstrations recently in 2012 (see here and here, for example), it is worth noting that 55 years ago, people in this country were already expressing their dissent at mass demonstrations. In fact, seems to me that Japanese activists deserve credit for basically inventing the anti-nuclear protests!

The UK first tested a hydrogen bomb in the Pacific Ocean in late 1956. The footage found on Critical Past is in response to the second testing in May, 1957. Unfortunately, the film cannot be embedded, so please watch it on their site:

(Image of the 1957 demonstration from British Pathe)

TenThousandThings said…
This is great, Martin...Because of inaccurate media reports & images, many believe that the current mass demonstrations are in the first in Japanese history, but the 1950's was a time of massive citizen action, in the millions, over years, re nuclear, military base issues. The bottom line: Japanese people were sick of war, this was only a decade after the end of WWII, and Japanese people wanted peace....
3:02 pm, July 27, 2012

Johntaro said…
These are interesting newsreels. I think the 'uzumaki (whirlpool)' maneuver the protesters can be seen using (about halfway into the first clip) was a strategy to prevent police from corralling like they do at current demos. It was a whirlpool of humanity.
I like that Pathe site too, especially the music accompanying the news reels, (but also impossible to embed).
11:31 pm, July 27, 2012