I Almost Forgot: Feed In Tariffs From July 1 In Japan 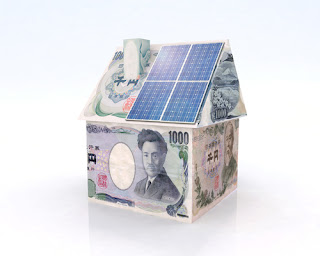 I wish they would come up with a better name than Feed In Tariffs, but ok, we got them, and that is good. It means we are now entering a new era for renewable energy.

Hey, call it whatever you want, a lot of people are going to like this. FIT? No joke. Don't throw a fit!


The system requires utilities to purchase all electricity generated through solar, wind, water and geothermal power, among other eco-friendly sources, at fixed rates for up to 20 years. The costs will be passed onto consumers.
The government's generous tariff rates have created considerable interest in the sector, with companies rushing to build massive solar and other power plants based on renewable energies.

Two large solar installations went online in Kyoto, Gunma, Niigata and Fukuoka prefectures the same day. Meanwhile, Kyocera Corp. plans to construct a 70-megawatt solar facility in Kagoshima Prefecture and is scheduled to establish a special company to oversee the project later this month. Mitsui Chemicals Inc. and other firms also intend to start work on a solar and wind power station later this year.

The government had approved 44 solar or wind power facilities with a combined output of 41,605 kw to join the system as of Thursday, according to an official at the Agency for Natural Resources and Energy, part of the industry ministry.

Sounds good to me. At least it is a start. The UK has them, and so does  Germany (calling it the "Stromeinspeisungsgesetz" (StrEG), or its "Law on Feeding Electricity into the Grid") and so does Ontario in Canada (I like their micro FIT program!), and a number of other places.

The Japanese term is 固定価格買い取り制度 (こていかかくかいとりせい, kotei kakaku kaitori seidou) so no wonder they are calling it the FIT here...

Eric Johnston is a little more cautious in his report the other day, noting that "major Japanese and overseas solar energy firms are expected to reap huge profits in the coming years from the new feed-in tariff that goes into effect Sunday, but other energy forms may be slower to take off due to a host of official restrictions, technical limitations and lack of political and financial support."

"The FIT system will immediately boost demand for solar panels, creating great opportunities for all solar battery manufacturers and related companies. It will lead to cities installing more solar panels, and the development of better energy management systems," Mikio Katayama, head of the Japan Photovoltaic Energy Association, said in late May.

The JPVA predicts that during the first year of the new tariff, solar power demand will double compared with 2011. As of the end of April, total solar capacity in Japan was about 5 gigawatts. The association predicts that by 2030, installed capacity will reach 100 gigawatts.

Top image found at cleantechnica.com, that notes that 42 yen for solar is very generous. Actually, the image is by Fabio Berti at Shutterstock. You get the picture.

Japan’s about to become the next major economy to implement a solar feed-in tariff, and from the looks of it, it’s going to be a generous one. (I can see a herd of solar companies migrating over to Japan now.) Wind and geothermal feed-in tariffs are also on their way to implementation.
Source: Clean Technica (http://s.tt/1a23D)

Japan’s about to become the next major economy to implement a solar feed-in tariff, and from the looks of it, it’s going to be a generous one. (I can see a herd of solar companies migrating over to Japan now.) Wind and geothermal feed-in tariffs are also on their way to implementation.
Source: Clean Technica (http://s.tt/1a23D)

For solar, Reuters is quoting 42 yen (or about $0.52, €0.39, or £0.32) over the course of 20 years. That’s “roughly twice what is currently paid in Europe,” Craig Morris of Renewables International notes before asking: “Will Japan be the next boom and bust market?” (Note: it’s still less than the $0.55 Ontario is planning to pay.)

Pandabonium said…
Sounds good to me too - get us off nukes and fossil fuels asap! We still need to conserve ever more. There is no alternative.
4:08 pm, July 03, 2012

Unknown said…
hey.. well said guys. and thanks for sharing such an inspiring blog.do keep up posting more.

Unknown said…
FIT is a very good model for energy producing and saving. Its one of best one.