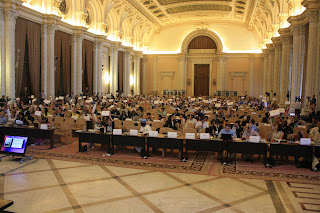 I am in Bucharest, Romania for the Ramsar Convention COP11 meeting, a large conference about wetlands. I'm here for the rice paddies, that also count as important places for migrating birds, frogs, insects, you name it... All kinds of biological diversity depends on them, including humans.

Photo from Linkages, IISD that provides daily news from the conference.

Update July 26: I meant to blog more about my experiences but it was a very difficult conference. Also my hotmail account was affected by a third party attempt to hijack it (which I think I managed to avoid!) and in addition, it was 35 C and very hot every day. I loved the city and the people, as noted above, and have mostly happy memories.

However, the Ramsar conference was a disaster, as far as I am concerned. The general public could not enter the massive building, and there was zero media exposure. Most of the time was wasted on a convoluted debate about the "hosting" of the secretariat, with some countries wishing for it to be moved away from IUCN in Geneva to UNEP in Nairobi. This debate had been going on for seven years, and was finally concluded, but it really soured the mood. There was also an acrimonious stalemate caused by Brazil regarding a resolution on wetlands and climate change, that was only resolved last minute.

On the bright side, there were lots of NGOs and people with posters and books about their Ramsar Sites. In fact, 1/3 of the NGO delegates came from Japan! There were not many NGOs from Europe, however (none from Sweden) so it was a surreal experience to be surrounded by so many Japanese-speaking wetland enthusiasts. I learnt a lot more about the way wetlands are protected in Japan, and but also share the concerns about "development" that destroys important sites for migratory birds, marine wildlife, and biological diversity.

But what really got under my skin was how certain corporations are making partnership deals with Ramsar. Coca Cola, Danone (Evian), Lafarge and others are rich companies that are spending their way into this Convention, and getting easy PR through their efforts. Yes, I understand that companies can do a lot of good, that is called Corporate Social Responsibility (CSR) and there are certain rules for it, although no real standards. But, for example, during the opening ceremony, the Danone Awards were hyped in a way that was just sickening. A international Convention should protect itself and its good name against such "partnership" efforts. We need to protect water from being commercialized, and I think IUCN is behaving irresponsibly by not taking a strong stand for the independence of the Ramsar Convention, but "sucking up" to the sponsors.

Even worse, Wetlands International held a side event about pesticide use in rice fields that helped promote genetically engineered BT cotton (that indiscriminately kills insects). The staff of the organization handed out flyers claiming that such GM crops can reduce pesticide use, without any concerns about the "rest of the story" such as harmful effects on biological diversity or health problems. Shocking.

With another, independent international NGO that represents many smaller and more alternative groups, World Wetland Network, my collegues and I could work effectively towards change of  Draft Resolution 15 about pesticide use and rice paddies. There is a brief report over at the website of Consumers Union of Japan. I want to thank everyone, especially Ramsar Network Japan (J) for their wonderful attention to details during this conference. I urge everyone to find out about local wetlands in the area where you live, and see what you can do to get involved to help.

Pandabonium said…
Good on you. I know my beloved Fiji was represented there. It disturbs me a bit that in the news coverage of the convention, tourism is a major focal point. Sad that economics seems to trump life and righteousness in human discourse on these matters. I mean, if there were no economic value in preserving wetlands, would that mean mankind would do nothing?

Unfortunately, I fear, the answer is yes. We really need a very fundamental awaking, don't we.

Pandabonium said…
Thanks for the update. "Corporate Social Responsibility" - aka "Green washing". Companies like Coca Cola don't even produce a single thing that anyone needs - totally unnecessary businesses even if they did no harm.

Partnering with the companies that are part of the problem is a really bad idea.