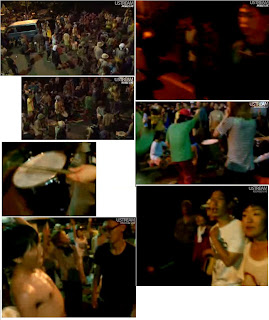 We are watching Oi protests as thousands of demonstrators are dancing, drumming, chanting "Saikado Hantai!" (No Restart!) and making a massive wall of noise outside the Oi nuclear reactors in Osaka. It is after midnight now, and tens of thousands of people from all over the world are watching this on Ustream and other social media. And the protest is still going strong.

It feels a bit like watching the Berlin Wall fall...

Some of the comments in English (there are ten times as many in Japanese!):


Massive respect to the PEOPLE of Japan, wish i could be there in more than spirit

We Japanese are thankful to you who are watching from overseas.

No japanese no cry.

RT if you agree this project. Please save children and moms in Fukushima. They are frightened at

A heroic deed, saving the whole world. Many thanks from Spain!!

Japan has a heritage of people dancing in protest.

The sound of protesters voicing their opposition to the restart of Japan's Oi nuclear power plant with other notes of hope and inspiration composed and arranged by Ryuichi Sakamoto.

Next big demo is on Friday July 6, outside Prime Minister Noda's residence in Tokyo.

mike in tokyo rogers said…
Wow! "Saikido Hantai!" It's great to see Japanese people finally getting riled up about something.... I am lost. What is the best choice for a nation with zero natural resources and a China about to launch a Thorium nuclear power plant... Are we safe? I don't know. Are we falling behind? That is an obvious "Yes!" What to do?
8:40 pm, July 02, 2012

Johntaro said…
Thanks for the tip of the hat and info on the next demo, etc! I also enjoyed reading your recent post on the feed-in-tarrif (or whatever they call it here). I'm glad to hear that Japan is finally getting FiT:)
9:09 am, July 03, 2012