Why I Love Classical Music: Shostakovich 10, A Love Story... 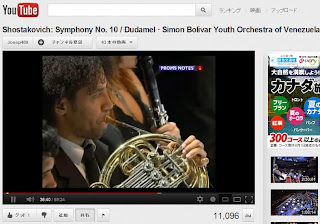 ...And a really hot conductor from Venezuela that I briefly introduced last weekend. Now, how do you do a proper blog post about a Soviet era composer, who had been in lots of trouble over the years, and love, and then end up with a Venezuelan conductor that gets his orchestra to play the Mambo to an ecstatic audience at The BBC Proms?

Back in 1953, Joseph Stalin had just died, which meant that for a brief moment, the USSR was having second thoughts about a lot of his policies (It also meant the end of hostilities in Korea as there would be no more military support from Moscow to Pyongyang, and thus a new era for the Far East). Shostakovich, who had been censured and blacklisted by the brutal dictator Stalin who had ruled the Soviet Union for 31 years; now Shostakovich could shine again.

His 10th Symphony was that: about freedom, and love. Specifically, about his Platonic love for a young pianist and composer from Azerbaijan, Elmira Nazirova, who was born in 1928 to an Azerbaijani-Georgian Jewish family. 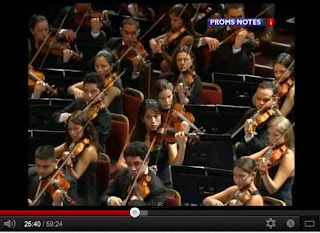 I just love how this great symphony, the 10th, comes down to Shostakovich's use of the names of the notes of his own name, and the name of Elmira. He admits as much in a string of letters to her, revealed much later by Elmira. Bach did much the same, using the notes B, A, C, and H, but in the case of Shostakovich it turns out asthe notes DSCH. (Thanks wikipedia!)


The third movement is a nocturne built around two musical codes: the DSCH theme representing Shostakovich, and the Elmira theme (

At concert pitch one fifth lower, the notes spell out "E La Mi Re A" in a combination of French and German notation. This motif is called out twelve times on the horn, representing Elmira Nazirova, a student of the composer's with whom he fell in love. The motif is of ambiguous tonality, giving it an air of uncertainty or hollowness.
In a letter to Nazirova, Shostakovich himself noted the similarity of the motif to the ape call in the first movement of Das Lied von der Erde, a work which he had been listening to around that time:[3] (

The same notes are used in both motifs, and both are repeatedly played by the horn.

Imagine that. What a story. In late 1953, this great composer is welcomed back on the stage, and he comes up with what is basically a symphony of platonic love. What an inspiration.

Fast forward: Back in 2007, Venezuelan conductor Maestro Dudamel, performed this difficult symphony with the Orquesta Juvenil Simón Bolívar de Venezuela (the youth orchestra of Simon Bolivar from Venezuela) to massive ovations from the crowd at the Prom.

Then, they came back with encore of the Mambo!

Ἀντισθένης said…
"I know a lot of composers, some of whom are considered great, but they are all ordinary people like us. Not Shostakovich. He was totally immersed in the world of music."

Martin J Frid said…
Thanks A, I had to look up ingenue in the dictionary, you could be right about that one. Must have been an amazing time for him to be able to complete another symphony after many years.
5:46 pm, July 01, 2012

Pandabonium said…
Super. Thank you. One of the great memories in my trombone career is playing Shastakovich Symphony No 5. Awesome composer.
4:19 pm, July 03, 2012