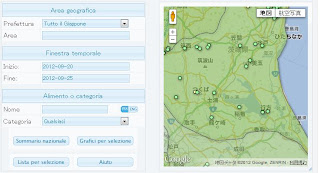 The Japan Times has a good piece on the food here, which is being continuously tested for radioactivity. There are some concerns about fish, chestnuts and "food sourced from forests, rivers and lakes in the Tohoku and northern Kanto regions and from the Pacific Ocean. This includes mushrooms, mountain vegetables, wild game, freshwater fish and bottom fish."

The Japan Times: Cesium contamination in food appears to be on wane

However, most people do not eat any of these items, and certainly not in any great quantities. As Takashi Ishimaru, a professor of ocean sciences at Tokyo University of Marine Science and Technology, points out to The Japan Times, when waste and plankton carcasses tainted with radiation sink to the seabed, they are eaten by the bottom-feeding organisms, which in turn are eaten by bottom fish. Commercial fishing near Fukushima Prefecture has been voluntarily banned so there is little chance of getting any of this on our plates. But Ishimaru also said it will take "much, much more time" before all fish near the coast of Fukushima are free of contamination.

Official data is updated regularly at the Ministry of Health and Welfare website (E). For example, the news is that chestnuts from Tochigi Prefecture, are now restricted "for the time being" together with bamboo shoots, shiitake mushrooms, boar meat, and some other foods, according to this pdf file from September 18, 2012.

You can check the available data on a remarkable website, http://www.contaminazione-alimentare.tk/dom-en.html

*Action levels mean foods will not be allowed to be sold.

More importantly, independent testing is carried out in Tohoku.

Can we believe government data? Are there any other data that indicate contamination of food we are eating is low?
Co-op Fukushima has been examining cesium levels in meals cooked by Fukushima Prefecture residents and the results are showing a similar trend. Any cesium detected is usually very low, the consumer group says.
The co-op has performed the tests two times, with each round covering 100 households. The families prepare an additional setting for every meal over the course of two days for testing by the co-op. About 90 percent of the participating households used produce from Fukushima Prefecture in their meals.
Among the 100 households tested between November and March, radioactive cesium was detected in 10 meals. But the highest detected amount was 11.7 becquerels per kilogram, far below the government limit of 100 becquerels per kilogram.
Cesium levels in the second set of testing between June and August showed a similar trend. Of the 100 tested households, cesium was detected in meals from just two of the 82 households the co-op has been able to confirm data from so far.
The highest amount was a mere 3.2 becquerels per kilogram, it said.
If the family that made this meal ate the exact same one each day for a year, their total exposure to radioactive cesium would be 0.037 millisieverts, according to the co-op. By comparison, when someone is exposed to a cumulative dose of 100 millisieverts, the risk of dying from cancer goes up by 0.5 percent, according to many scientists.
Co-op Fukushima said it will continue to perform the tests and keep track of the contamination levels.

Top image: Using google maps, the Italian website shows one case of "log-grown shiitake" mushrooms in Tsukuba city, with Cesium detected at 17 Bq/kg, much lower than the 100 Bq/kg level standard set by the government. It shows up as a yellow dot on the map, while other dots are green, meaning no Cesium was detected.
Food Food safety Fukushima