Okinawa Film: Song Of Gondola Going Round And Round 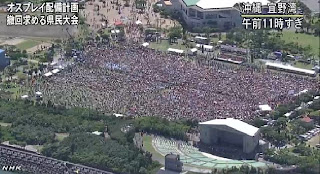 100,000 people protested in Okinawa on Sunday against the deployment of US Osprey helicopters, known as Widowmakers due to their many accidents - and other military helicopters also do tend to be accident-prown, but that is another issue - but of course it is not just about Ospreys. It is an impressive display of non-violence.

It is about a part of Japan that deserves better.

Lots of photos from Sunday September 9 demonstrations over at Ten Thousand Things.

Peaceful, dignified demonstrations that should make everyone proud. But unless they have some effect on policy makers in Tokyo and where else in the world decisions are made about their faith fate, do we really expect Okinawans to stay quiet, calm, and dignified?

Today, a hundred thousand of them showing up, and the announcer from NHK World was clearly moved on Sunday. Good. We are all moved this. And moved by how 75% of American military bases are on Okinawan soil, yet the US military complex cannot even begin to fathom how much this latest Osprey deployment move has angered ordinary people.

That's 100,000 people showing up just for an ordinary, peaceful demonstration. Did I mention "calm" and "dignified"? What else do you want? Mahatma Gandhi...? More from NHK World:

A massive rally against the US military plan to deploy the Osprey aircraft has been held in the southernmost prefecture of Okinawa. The participants demonstrated for about an hour in Ginowan City from 11AM on Sunday. The city hosts the Futenma base where the aircraft are to be deployed.
Representatives from most of the 41 municipalities in Okinawa and more than 170 groups were among the protestors.

Ginowan Mayor Atsushi Sakima called for cancellation of the plan in his speech as representative of the local community. He said he cannot but get angry at the plan to deploy Ospreys that lack a safety guarantee at the Futenma base, which is the world's most dangerous base for those living nearby. The protestors adopted a resolution demanding cancellation of the deployment and the closing of the Futenma base.

Defense Minister Satoshi Morimoto is to meet the Okinawa governor as early as Tuesday to discuss the Osprey safety issue. The Defense Ministry is seeking an understanding of the issue before October's deployment.
Sep. 9, 2012

Here is a trailer to a 2010 film that has received almost zero notice, although it looks like it should be rather good. Nirai no oka (にライの丘） or A Song of Gondola by Naoya Oshiro. 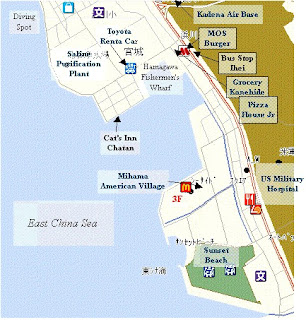 Literally, the Japanese title means "Bitter Height" which I think may have been a better English title. It was shown at the Okinawa International Movie Festival in March, 2010, and introduced as such:

A man who has failed to have a meaningful career, family life, and life in general recalls the memories of Chatan, the town he grew up in as a boy. Yearning to be tough and strong.
Faint first love. The rebellious phase. The first true friend. The secret of his birth. And the "past" that his father had concealed for so long... This is a story that delineates the mystifying nature of life, one that circles around and around the same place like a gondola on a Ferris wheel. It is a bittersweet but encouraging gift for all those who "cannot make it work".

I wonder what happened to that film. Looks beautiful. Looks like we all need to pay more attention to what is happening in Japan's islands Down Under, it's deep belly, the base at it's spine. If it has any.
Events NGO Okinawa Peace US military bases US-Japan Mutual Security Treaty (AMPO)