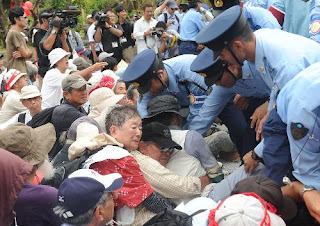 
Top photo from Okinawa Times. I hope the photographer (s) will identify themselfs.You can get major awards for images like this. Who are you!

So, whose side is the United States really on?

The protesters — as many as 100,000, according to organizers — gathered at a seaside park on Okinawa to demand that the plan to deploy 12 MV-22 Osprey aircraft on the island be scrapped, saying they are unsafe. The U.S. plans to deploy the Osprey, which takes off like a helicopter and flies like an airplane, to replace older CH-46 helicopters that are already there. 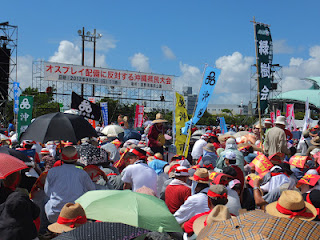 Safety concerns boiled over after Osprey crashes in Morocco and Florida earlier this year. An incident in North Carolina last week that officials called a "precautionary landing" further aggravated the sentiment.
"We refuse to accept a deployment of Osprey that has already proven so dangerous," said Atsushi Sakima, mayor of Okinawa's Ginowan City, home to the base where the Ospreys will be deployed. "Who is going to take responsibility if they crash onto a populated neighborhood?"
Participants cheered in support, waving red banners and placards with a message saying "Osprey No!"
The tilt-rotor planes have been used extensively in Iraq and Afghanistan. The United States says they have a solid record and can fly faster and carry bigger loads than the CH-46, which it is replacing worldwide.
Okinawa Gov. Hirokazu Nakaima has asked Japan's central government to seek a full U.S. investigation into the Osprey crashes and suspend their deployment until the aircraft's safety is verified.
The Osprey deployment plan has also reignited longstanding anger over the heavy presence of American troops on Okinawa and has become a headache for officials in Tokyo and Washington hoping to calm anti-base sentiment. More than half of the roughly 50,000 U.S. troops stationed throughout Japan are based on Okinawa. 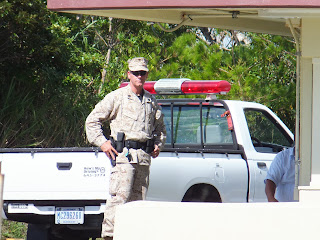 Okinawans are particularly angry because the Ospreys will be deployed to Marine Corps Air Station Futenma, which the two countries decided to close more than a decade ago. The base has remained in operation because a replacement site hasn't been readied.

Armed US soldiers, with ambiguous orders, at least we all hope "do not use that side gun against civilians" is part of the training.... 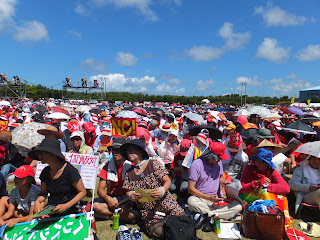 While we can all deal with this, from a distance, we also know that in the United Nations, recently, Okinawa was not mentioned even once.

That is how it gets us, in a personal way. All the talk about islands here and there in the ocean, nobody seems to speak up for the Okinawans, in 2012.