The 7th European GMO Free Regions Conference welcomed 200 participants from 33 countries in Brussels. Intensive workshops and lectures, along with the traditional GMO-Free party in the “mundo b” on the first day were followed by debates and presentations in the European Parliament on Wednesday September 5th. Key issues on the agenda were the still-unresolved question of national bans for the cultivation of GMO crops and a controversial debate with the European Food Safety Agency’s executive Director Catherine Geslain-Lanéelle on the performance of her agency, ten years after its foundation.

The final discussion “How Roundup ready is the European agricultural policy?” was introduced by Sofia Gatica and Maria Godoy from Argentina. They presented people who lost children and families due to the spraying of Roundup Ready soybeans in their neighborhood. “We must work together against transnationals like Monsanto!” said Sofia Gatica, who has just won a first sentence against the aerial spraying of “Roundup” in an Argentinien court. Gatica called upon European politicians to stop the import of GM soybeans from her country and warned the Commission not to approve Monsanto’s Roundup Ready soybeans for cultivation in Europe. Encouraging news came from speakers from the USA, Japan, India and China, where GMO expansion is faced with increasing resistance.

Although the number of GMO-Free Regions has substantially increased (see map) since the last GMO Free Europe Conference in 2010, participants agreed that the challenges ahead will require concerted action. These challenges include new GMO approvals and attempts to undermine GMO-Free standards with dubious thresholds for low level presence of GMOs in feed, food and even seeds. 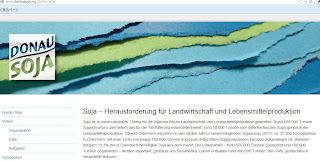 The GMO-Free Europe Conference in Brussels connected with two parallel conferences in the network: The GMO-Free regional governments in Erfurth, Germany, and an international soybean business conference of GMO-Free “Danube soybeans” at the Vienna Stock Exchange. Representatives of all three conferences agreed to aim for a joint meeting of GMO-Free politicians, business and NGOs in 2013.

As for Japan, Consumers Union and other groups are congratulating some 210 supermarkets around the country that have decided not to sell GM papaya:

The No! GMO Campaign was set up in 1996 to stop genetically modified foods. 16 years later, there is no commercial GM farming in Japan. Consumers and civic groups are continuing the battle against imported GM foods. In December, 2011 the government approved GM papaya and soon, the American producers in Hawaii were promoting the expensive fruit at a trade fair near Tokyo, giving out slices as free samples. The No! GMO Campaign started an effort to investigate if the GM papaya from Hawaii was actually sold in Japan or not.

Citizens and activists all around Japan approached their local supermarket chains and the result was revealing. Not a single supermarket chain has decided to introduce the controversial virus-resistant papaya from Hawaii. Could it be that the Americans are hoping that people will simply forget about GM papaya, before they start the marketing introduction?

On July 25, 2012, the No! GMO Campaign sent a press release to thank the 210 supermarket chains, expressing appreciation that they do not sell GM papaya. “We will continue monitoring to make sure that no stores sell GM papaya in Japan, ” says Amagasa Keisuke, No! GMO Campaign director. “Illegal GM papaya seeds from Taiwan were also imported to Okinawa, causing financial damage to papaya growers in Okinawa, southern Japan. The farmers brought GM papaya to the Japanese market without knowing that it was genetically modified. So far, 35 growers were forced to cut down their illegal GM papaya trees,” notes Amagasa Keisuke. Better legal protection is needed to compensate farmers in such unfortunate cases.