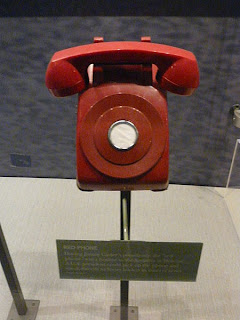 This seems to be a good time to talk about an important lesson from the Cold War era, when superpowers battled mindlessly with arms build up and comments by politicians that took no regard of ordinary people and their desire for peace. Détente emerged as a response to that, as a way for diplomats to quietly go about their business, which is negotiations and building trust, leading up to agreements.

A French term, détente basically means "relaxation" or "chill out" in American, not sure what they say in Russian, google gives Детант or Разря́дка  (Perestroika).

In the heat of the moment, media also gets carried away and forgets that it has responsibilities not only to its paying readers in the nation but also to global peace... With blogs and the Internet, things have gotten even more complex. But in the 1960s the main achievement was to install a direct communication link between the White House in Washington and the Kremlin in Moscow. That way, at least in theory, the leaders could call each other and settle any misunderstandings before nuclear missiles were fired, and to deal with a crisis in a more intelligent way.

Seems to me that Tokyo and Beijing and Seoul could need something similar, in 2012.

The lesson is that while negotiations are under way - and diplomats need time, sometimes a lot of time - politicians should not do anything rash and hasty to cause more tension. That's the essence of détente as a policy of international governance...

The early Red Phone was no telephone at all, but an East German teleprinter, sending signals via cable passing Copenhagen and Stockholm, according to a hotline system set up by Florida-based Harris Corporation. The Jimmy Carter Library and Museum provides the real thing as it looked in the 1970s (photo). Later versions used satellites.

You would think that the clever people here in Japan and China and Korea could come up with something that would work just as well today!