News You Can Use: Meat map shows you how to avoid antibiotics


I'd say avoid meat altogether because it is so unhealthy and difficult to know what is in your sausage. What a word, "sausage" it really sums it up, like "ham" which also is just letters to advertise a strange product. I was reading recently about tape worm infections that happen to be related to pork production. Seems there is a link to brain damage.

Speaking of which, I looked up tape worm and associated diseases, and found this gem - a study about a patient who worked in a meat factory... Ouch. Also reveals that the diseases are not "reportable diseases" which means most cases probably go undetected and don't enter into the statistics. 221 deaths in the US during 1990-2002 may not sound like a lot but my guess is that a lot of cases go unreported.

Now, Robert Kenner who visited Japan earlier this year, has stepped up his fight against nasty food industry practices with a map that shows where in the United States you may be more or less exposed to the huge farms that use a lot of drugs to keep pigs alive. 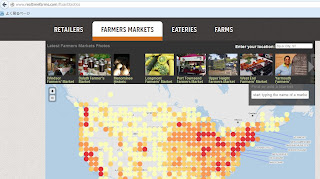 Real Time Farms has teamed up with FixFood to help you find meat raised without antibiotics at farms, farmers markets, eateries, and retailers across the country. Special thanks to Whole Foods, Applegate and Organic Prairie for providing retail store locations.

Joan over at Popcorn Homestead here in Japan is making a similar effort that I really like to promote farmers' markets in and around Tokyo.


In  some communities, like, say, Woodstock, Vt., or maybe Nevada City, Calif., buying antibiotic-free meat is really easy. Your next-door neighbor probably raises it. In other places like, oh, almost everywhere else except for big cities, and not even all of them, finding a gentleman or gentlelady farmer or special organic store is a bit harder. This map aims to meet that challenge, and to bring awareness to a larger campaign — led by Kenner’s nonprofit FixFood — to reduce the use of antibiotics in factory-farmed cows.

In addition to finding you places to locate antibiotic-free food, FixFood is also working to get more stores on the map by petitioning Trader Joe’s to only sell antibiotic-free meat. This seems plausible, since the chain has already committed to selling only sustainably farmed seafood by the end of 2012.